1. Etiologic agent and pathogenesis: Rubeola (measles) virus is an enveloped single-stranded RNA virus that is a member of the Paramyxoviridae family. It infects the upper respiratory and conjunctival epithelial cells. The virus replicates in the local lymph nodes as well as lymphatic tissue and causes secondary viremia, which leads to other organ involvement (eg, skin).

2. Reservoir and transmission: Humans and other primates are the only reservoir for measles virus. Transmission is via direct contact and airborne droplet nuclei, occurring because of the production of aerosolized particles from respiratory secretions of infected hosts.

3. Incubation and contagious period: The time from exposure to the onset of first prodromal symptoms is 8 to 12 days; the rash generally appears 7 to 18 days after exposure (14 days on average). The disease is highly contagious and susceptible individuals are at a very high risk of developing measles after being exposed to measles virus. The patient is contagious from the onset of the prodromal phase for up to 5 days after the appearance of rash.

Infection is almost always symptomatic. The signs and symptoms appear in the following order:

1) Prodromal signs and symptoms (lasting a few days): Fever up to 40 degrees Celsius (1-7 days); dry cough (this may persist for 1-2 weeks), pronounced rhinitis. Bilateral, nonpurulent conjunctivitis (causing photophobia) may be significant (particularly in adults) and accompanied by eyelid edema; it resolves with the resolution of fever.

2) Koplik spots (Figure 8.17-3): Multiple gray-white papules on the buccal mucosa adjacent to the premolars, which appear 1 to 2 days before the onset of rash and persist for 1 to 2 days after its resolution. Although Koplik spots are a pathognomonic sign, their absence does not exclude measles.

3) Rash: Erythematous maculopapular eruptions (dark red to purple in color), 0.1 to 1 cm in diameter, appear over 2 to 4 days. The rash typically starts on the head (forehead, at the hairline, behind the ears; excluding the scalp) and gradually progresses to include the trunk and extremities (Figure 8.17-4). Individual lesions usually become confluent. Within 3 to 7 days, the rash begins to fade away and gradually disappears in the order in which it appeared, leaving brownish discolorations and fine desquamation.

Measles can be suspected on the basis of clinical manifestations, but generally the diagnosis should be confirmed by diagnostic testing. However, measles may also be diagnosed conclusively on the basis of the typical clinical manifestations in a patient who had contact with an individual in whom the infection was confirmed by laboratory test results.

Diagnostic tests are recommended in each case of suspected measles. Obtain specimens for virology and molecular studies.

1. Serology (enzyme-linked immunosorbent assay [ELISA]): The diagnosis is confirmed by serum measles virus-specific IgM antibodies in a person who has not been vaccinated within the previous 2 to 3 months. The antibodies are detectable within 2 to 3 days of the onset of the rash and disappear over 4 to 5 weeks. Blood samples should be collected after >7 days from the onset of the rash (which is when the highest titers of specific IgM are observed). If the blood samples have been obtained too early and the result is negative, the test should be repeated. If IgM measurement is not feasible, the diagnosis of measles can be confirmed on the basis of a 4-fold increase in the specific IgG antibodies titer observed over a 4-week period (acute phase vs convalescence).

2. Detection via molecular techniques or culture: Clinical specimens (blood, urine, throat swab, nasopharyngeal swab/aspirate) should be collected, preferably within 1 to 4 days of the onset of the rash. Detection is now most easily done using molecular techniques (eg, polymerase chain reaction) on respiratory samples or urine at a reference laboratory, but isolation of measles virus from urine or peripheral blood mononuclear cells can still be undertaken. Sampling multiple sites increases sensitivity (eg, respiratory and urine).

Differential diagnosis should include other diseases associated with rash:

No specific antiviral treatment is available.

Treatment is symptomatic only and includes antipyretics, adequate hydration, and nutrition. Vitamin A treatment in doses up to 200,000 U daily for 2 days reduces mortality in deficient patients.Evidence 1Moderate Quality of Evidence (moderate confidence that we know true effects of the intervention). Quality of Evidence lowered due to the unclear deficiency status (study done in South Africa). We consider the Quality of Evidence to support vitamin A use in severely ill children in other countries as low (due to indirectness). Hussey GD, Klein M. A randomized, controlled trial of vitamin A in children with severe measles. N Engl J Med. 1990 Jul 19;323(3):160-4. PubMed PMID: 2194128. Bacterial complications (eg, pneumonia) require antimicrobial treatment.

Infants and adults (particularly malnourished and with impaired cell-mediated immunity) are at a higher risk for complications:

1) Sinopulmonary infections can result from the primary measles infection or bacterial superinfection. Otitis media (7%-9%) and pneumonia (1%-6%) are common; the latter is associated with high mortality, especially in infants.

2) Neurologic complications can be severe. Acute encephalitis only occurs in 0.1% of patients but is associated with high mortality (15%); a significant proportion of patients (25%) are left with permanent neurologic sequelae. Seizures (0.5%) and blindness (retrobulbar optic neuritis) can also occur. Subacute sclerosing panencephalitis, a rare complication (1-4/100,000; the prevalence increases to 1/8000 cases in patients <2 years of age), is a progressive, neurodegenerative, uniformly fatal disease; it usually develops several years after the measles virus infection (on average 7 years).

4) Secondary bacterial infections and exacerbation of latent tuberculosis (measles virus induces transient but significant immunosuppression): These are often severe and may be fatal; persistent (lasting longer than a few days) or recurrent fever indicates possible complications.

Measles usually has a mild or moderately severe course. Patients recovering from measles develop a lifelong immunity. Measles may have a particularly severe course and involve a high risk of complications in malnourished infants and young children (particularly vitamin A–deficient) and other immunodeficient patients. Deaths are rare and predominantly caused by complications (particularly in infants, malnourished individuals, and patients with impaired cell-mediated immunity).

1. Vaccination is the key prevention method. Vaccination should be offered to nonimmune immunocompetent individuals after contact with a sick individual within 72 hours of exposure.

2. Passive immunoprophylaxis: Either IM or IV immunoglobulin (particularly for those >30 kg) can be offered to susceptible contacts for whom vaccination is contraindicated (eg, immunocompromised individuals, pregnant women). It should be given within 6 days of exposure.

2. Mandatory reporting and epidemiologic investigation: Each suspected case of measles should be reported to local public health authorities; as noted above, its transmissibility can quickly lead to outbreak situations. 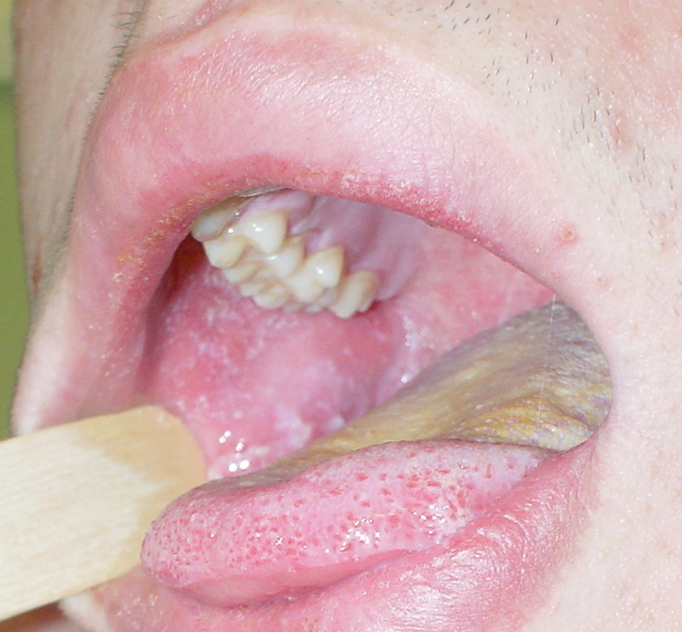 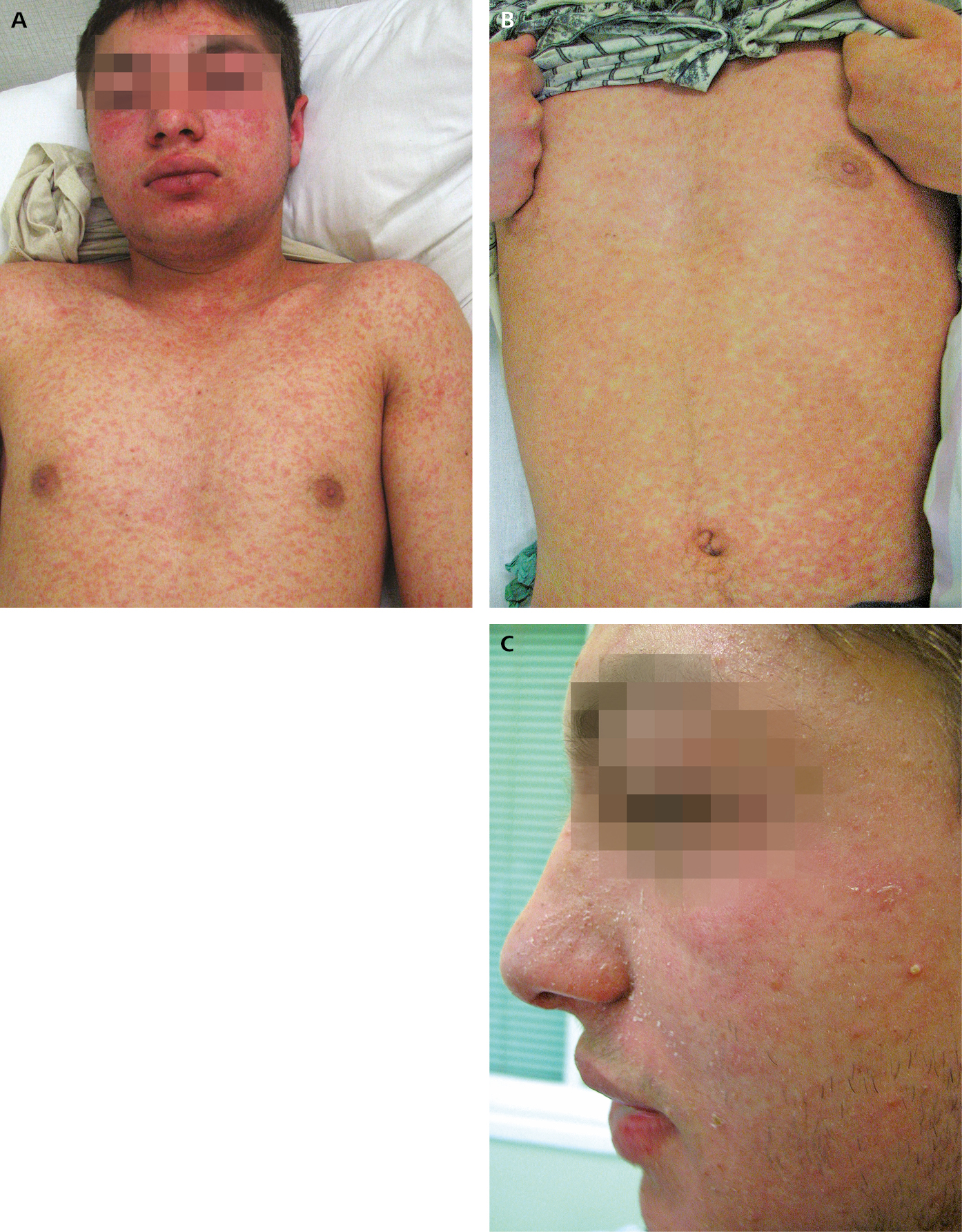