Statement on sarcoidosis. Joint Statement of the American Thoracic Society (ATS), the European Respiratory Society (ERS) and the World Association of Sarcoidosis and Other Granulomatous Disorders (WASOG) adopted by the ATS Board of Directors and by the ERS Executive Committee, February 1999. Am J Respir Crit Care Med. 1999 Aug;160(2):736-55. Review. PubMed PMID: 10430755.

Idiopathic pulmonary fibrosis (IPF) is the most common form of chronic progressive fibrosing interstitial pneumonia of unknown cause, occurring primarily in older adults aged >60 years and limited to the lungs. Defined by a distinct radiographic and histologic pattern called usual interstitial pneumonia (UIP), IPF is characterized by a relentless progression of interstitial fibrosis and a progressive decline in gas exchange. The median survival from the time of diagnosis is approximately 3 to 5 years.

The incidence of disease increases with older age, with presentation typically occurring in the sixth and seventh decades of life. Cohort studies have shown that the majority of patients have a history of cigarette smoking and more men than women are affected.

A genetic predisposition is observed in 2% to 20% of patients. Hereditary disease is typically inherited as an autosomal dominant trait with incomplete penetrance. Mutations in the promoter region of MUC5B and genes associated with telomere maintenance and surfactant protein expression have been among the various genetic abnormalities reported. The precise genetic and host susceptibility factors that determine the phenotypic expression and clinical manifestations of sporadic IPF remain unknown.

IPF has an insidious onset and manifests as unexplained exertional dyspnea and dry cough, which progress over many months to years. Patients commonly have bibasilar crackles on chest auscultation, with nearly 25% of patients demonstrating evidence of clubbing. In later stages IPF patients can develop symptoms of cor pulmonale with progressive right ventricular dysfunction.

The radiographic and histologic UIP pattern can be observed in numerous fibrotic interstitial lung diseases (ILDs), including asbestosis, connective tissue disease–related interstitial lung disease (CTD-ILD), chronic hypersensitivity pneumonitis, and drug reactions. Hence, as proposed by the updated consensus statement on IPF, the establishment of a diagnosis of IPF requires:

2) Confirmation of typical features of UIP on high-resolution computed tomography (HRCT) in patients not subjected to surgical lung biopsy.

3) Specific combinations of HRCT and histologic abnormalities suggestive of the UIP pattern in patients in whom surgical lung biopsy was performed.

Hence HRCT of the chest is an absolute necessity in the evaluation of ILD. The UIP pattern on HRCT includes basilar-predominant subpleural reticular changes, traction bronchiectasis, and honeycombing. Honeycombing is critical for making a diagnosis in the absence of a surgical lung biopsy. It is manifested on HRCT as clustered cystic airspaces, typically of comparable diameters on the order of 3 to 10 mm (Figure 15.7-1).

In the absence of a diagnostic gold standard, accuracy is dependent on clinical, radiographic, and histopathologic correlation. This can be best accomplished with expert multidisciplinary discussion, particularly in instances of diagnostic uncertainty.

2) A decline in diffusion capacity of the lung for carbon monoxide (DLCO) ≥15% during 6 months of follow-up.

5) Hospitalization because of respiratory decline, pneumothorax, or acute exacerbation.

Acute exacerbations are serious events in IPF with an incidence of 5% to 15% per year and median survival <3 months. Clinical evaluation is required to exclude alternative causes of acute respiratory failure, including pneumonia, heart failure, pulmonary embolism, and other identifiable causes of acute lung injury. Even if there is a lack of evidence for infection, broad-spectrum antibiotic therapy is usually administered. Glucocorticoids are also often used, based on their potential to treat acute lung injury or organizing pneumonia, and are recommended for the treatment of acute exacerbations despite very limited evidence. Pulse doses of glucocorticoids (IV methylprednisolone 0.5-1 g daily for 3 days) are commonly used, while lower doses (prednisone 1 mg/kg) may be preferred in patients with a milder flare. Both strategies are typically followed by a rapid taper and cessation of prednisone within several weeks.

The median survival from the time of diagnosis is 3 to 5 years. Significant heterogeneity, however, exists among individual patients, and the clinical course is variable and unpredictable. In some patients the disease is characterized by rapid progression and functional impairment, while others experience a protracted course punctuated by acute exacerbations. The risk of acute exacerbation increases with the severity of lung function impairment. Lung cancer develops in 10% to 15% of IPF patients. 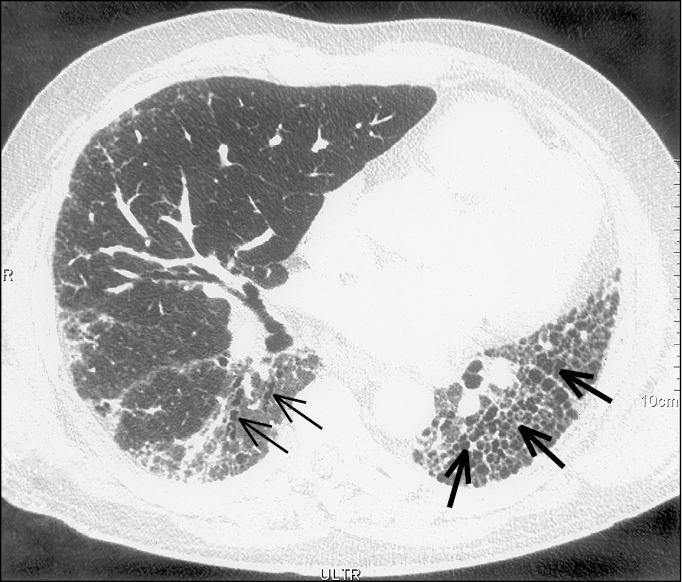