A 45-year-old male with history of HIV and skin lesions presented with chronic pulmonary findings not responding to antibiotic therapy. The patient has CD4 count of less than 200 cells/µL and had elevated HHV–8 antibody titer. Posteroanterior (PA) chest radiographs were requested (Fig. 1). 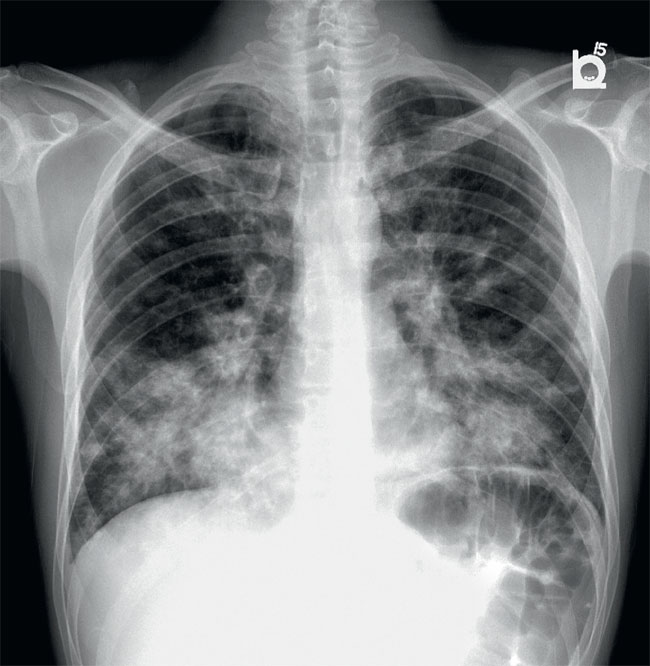 The most apparent finding on the PA image (Fig. 2) is the presence of bilateral heterogeneous irregular mass-like opacities and consolidations with central distribution and perihilar predominance. There is relative sparing of the upper lobes, pleural spaces are clear and cardiac silhouette is not widened. These consolidations show an air-bronchogram pattern. 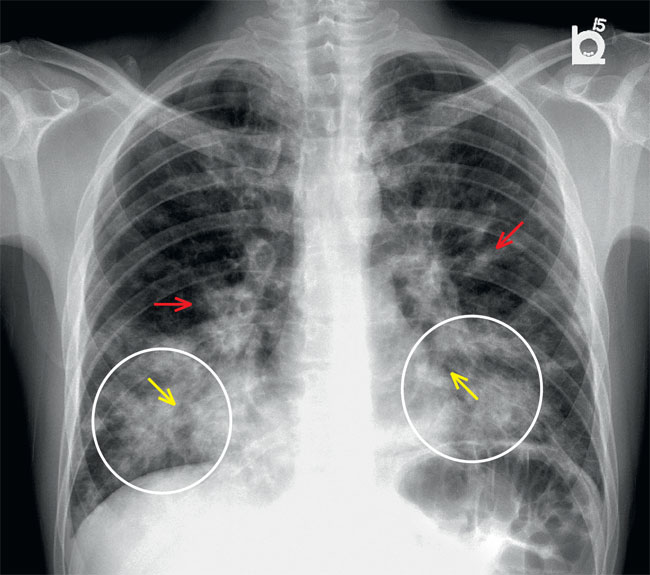 Approach the differentials with a chest radiograph and demystify chronic air space diseases?

Infections remain the predominant cause of respiratory disease in HIV. However non resolving consolidation could be secondary to atypical infection like mycobaterim, lymphoma and Kaposi Sarcoma. The presence of skin lesions might suggest Kaposi sarcoma.
Chest radiographic findings are nonspecific, and Kaposi sarcoma frequently coexists with opportunistic infections in people with AIDS.
There are two distinct patterns visible: diffuse linear and reticular interstitial opacities (including Kerley B lines); and diffuse nodular opacities. Both patterns have a perihilar dispersion, indicating a bronchovascular distribution. Bronchovascular nodules can take on the appearance of flames. Pleural effusions are frequently seen. Although hilar and mediastinal lymphadenopathy is widespread, they are not bulky. In our case, the fungal disease, bacterial bronchopneumonia, mycobacterial infection, and lymphoma were top differentials of nodular disease, which is already diagnosed with AIDS.

This case was subsequently investigated with a CT scan of the chest. Please review the CT scan (Fig. 3). It shows that there are bilateral perihilar consolidations with air bronchograms. Irregular nodules or masses with a peribronchovascular distribution, often called "flame-shaped" lesions, are very characteristic.

Because of these ubiquitous manifestations of Kaposi sarcoma, it is essential to be aware of its various imaging faces.