Baglin T, Hillarp A, Tripodi A, Elalamy I, Buller H, Ageno W. Measuring Oral Direct Inhibitors (ODIs) of thrombin and factor Xa: A recommendation from the Subcommittee on Control of Anticoagulation of the Scientific and Standardisation Committee of the International Society on Thrombosis and Haemostasis. J Thromb Haemost. 2013 Jan 24. doi: 10.1111/jth.12149. [Epub ahead of print] PubMed PMID: 23347120.

Both intravenous and subcutaneous unfractionated heparin (UFH) as well as subcutaneous low-molecular-weight heparins (LMWHs) are used.

1) Active clinically significant bleeding (in exceptional cases heparin may be considered in treatment of some forms of disseminated intravascular coagulation [DIC]).

2) Acute intracranial bleeding, spontaneous or posttraumatic subarachnoid hemorrhage (usually an anticoagulant may be started at prophylactic doses after 5-10 days, and at therapeutic doses after ≥2 weeks).

4) Hypersensitivity to the drug.

5) A positive history of heparin-induced immune thrombocytopenia (HIT). In selected circumstances (eg, need for cardiac surgery), patients with prior HIT may be re-exposed to heparin if repeat HIT antibody testing is negative. Consultation with a hematologist is recommended.

2. Other clinical conditions associated with an increased risk of bleeding (relative contraindications): In these circumstances, the decision to use or not use anticoagulant therapy is based on an assessment of the risks versus the benefits of anticoagulation in individual patients.

1) Recent gastrointestinal (GI) bleeding or a GI condition associated with a high risk of bleeding.

7) Recent brain, spinal cord, or eye surgery (brain or spinal surgery, particularly in patients with additional risk factors for venous thromboembolism, is an indication for prophylaxis, often started as early as on the first day after surgery).

10) ≤24 hours after surgery, organ biopsy, or artery puncture (up to 4 days in patients with abnormal hemostasis during surgery).

The risk of bleeding is increased in patients simultaneously treated with antiplatelet and anticoagulant agents; however, such combination therapy may be indicated (eg, in acute coronary syndromes).

1. UFH: Measure the activated partial thromboplastin time (aPTT). In patients in whom the target aPTT cannot be achieved despite the use of high-dose UFH, measure anti-Xa activity (target level: 0.35-0.70 IU/mL) and adjust the dose of UFH or switch from UFH to LMWH based on the results.

2. LMWH: In general, it is not necessary to monitor the anticoagulant effect of LMWHs, defined by anti-Xa activity, but this should be considered for patients who are receiving therapeutic doses of LMWHs who have severe obesity (eg, >130-150 kg), have severe renal insufficiency (creatinine clearance <30 mL/min), or who are pregnant. The peak anticoagulant effect (measured 4 hours after LWMH administration) is considered adequate if anti-Xa levels are 0.6 to 1.0 IU/mL in patients receiving twice-daily LMWH and 1.0 to 1.3 IU/mL in patients receiving once-daily LMWH.

Subcutaneous heparin injections frequently cause ecchymosis of 1 to 4 cm in diameter at the site of injection. Cases of life-threatening or health-threatening bleeding (most frequently GI, intracranial, or retroperitoneal) are rare; they require treatment to neutralize the anticoagulant effect of heparin.

1. Neutralization of the effects of UFH:

2) Due to the short half-life of UFH (60-90 min), when calculating the dose of protamine in patients receiving UFH by IV infusion take into account only the amount of UFH administered in the last 3 hours (eg, in a patient receiving an infusion of 1250 IU/h, administer 40 mg of protamine).

3) Monitor the effects of treatment by measuring aPTT (it should become shorter in the course of the treatment).

1) Non–immune-mediated (type I) HIT is usually associated with a mild reduction in the platelet counts (generally not falling <100×109/L) observed in 10% to 20% of patients during the first 2 to 4 days of UFH treatment. This causes no clinical manifestations and the platelet count returns to normal despite continued treatment with heparin.

Vaccine-induced immune thrombotic thrombocytopenia (VITT) (Figure 3.1-1) is similar to type II HIT, but is not related to heparin administration. VITT has been described to occur 4 to 28 days after receipt of the SARS-CoV-2 vaccine (adenovirus-vector type). It manifests clinically by the development of thrombosis, often at unusual sites (cerebral sinus veins, splanchnic veins), thrombocytopenia (platelet count usually 50×109/L to 100×109/L), and elevated D-dimer concentration. VITT is confirmed by the serologic testing used for HIT.

2. Risk of HIT and the need for monitoring platelet counts:

1) High risk (>1%): Patients after surgery receiving UFH at prophylactic or therapeutic doses for >4 days (particularly after cardiac, vascular, or orthopedic surgery) and patients with cancer. In these patients, monitor platelet counts at least every 2 to 3 days for the first 14 days of heparin treatment or until its discontinuation if the treatment lasts <14 days.

2) Moderate risk (0.1%-1%): Medical patients and pregnant women receiving UFH for >4 days; patients after surgery receiving LMWH for >4 days; patients after surgery or patients requiring intensive care in whom UFH is used to flush a central venous catheter; medical patients and pregnant women receiving LMWHs who have previously received at least one dose of UFH. In these groups monitor platelet counts at least every 2 to 3 days, from day 4 until day 14 of treatment, or until its discontinuation if lasting <14 days.

3) Low risk (<0.1%): All patients receiving UFH for <4 days; medical patients and pregnant women receiving LMWH regardless of the time since the start of the treatment, and medical patients in whom UFH is used to flush a central venous catheter. In these groups it is not necessary to monitor platelet counts.

When starting treatment with UFH/LMWH in patients who have received UFH in the prior 100 days or in whom such information cannot be obtained, assess the platelet count before starting UFH/LMWH and 24 hours afterwards. Assess the platelet count and compare it with previous results in every patient who develops fever, respiratory failure, heart failure, neurologic symptoms, or any other unexplained clinical symptoms within 30 minutes of an IV injection of UFH.

3. The course of HIT: After the discontinuation of heparin, the platelet count usually increases within a few days; serum antibodies against heparin-PF4 complexes remain elevated for several weeks or months. The most frequent cause of death in patients with HIT is pulmonary embolism, less commonly myocardial infarction or stroke.

4. Diagnosis: You may use the 4T’s pretest probability score (Table 3.1-1) to predict HIT. It should be suspected in patients after cardiac surgery and in those who have been treated with heparin (usually for ≥5 days) or have recently received heparin if the decrease in the platelet count is due to an unexplained cause. Another clinical sign that is associated with HIT is skin necrosis at the heparin injection sites. Do not delay appropriate treatment until the diagnosis is confirmed by laboratory test results (antiheparin antibodies). A useful indicator for the diagnosis is a characteristic increase in the platelet count observed after the discontinuation of heparin.

1) In the case of a strong suspicion of HIT based on clinical symptoms, immediately discontinue heparin (including flushing of intravenous catheters).

3) If the patient is receiving a vitamin K antagonist (VKA) at the time of diagnosis of HIT, discontinue the VKA (use of VKAs in the early phases of treatment of HIT complicated by deep vein thrombosis increases the risk of limb necrosis). Do not resume VKAs until the platelet count increases to >150×109/L; start with a low dose (2-4 mg of acenocoumarol, 3-5 mg of warfarin) in combination with a nonheparin parenteral anticoagulant (preferably fondaparinux), which may be discontinued after 5 days if the platelet counts stabilize and the international normalized ratio (INR) has been maintained within the therapeutic range for 2 consecutive days. Alternatively, a DOAC (preferably rivaroxaban) can be administered alone.

4) In patients with no active bleeding, transfusion of platelet concentrates is not recommended.

5) In patients with VITT, treatment is anchored on immune suppression (IV immune gamma globulin 1 g/kg for ≥2 days), avoidance of heparins, and use of nonheparin anticoagulants (eg, DOACs).

6. Management of patients requiring cardiovascular surgery, cardiac catheterization or percutaneous coronary intervention: In individuals with acute HIT or with a history of HIT (with no antibodies), replace heparin with one of the following anticoagulants: bivalirudin, argatroban, or lepirudin.

1. Osteopenia and osteoporosis: In patients treated for >3 months with UFH or (less commonly) LMWH, bone mineral density (BMD) usually decreases by a few percent (in rare cases a greater decrease is observed in patients treated with UFH). BMD usually returns to baseline values within a few months after the discontinuation of heparin. The risk increases with longer heparin administration (particularly >6 months) and with age.

2. Skin necrosis: This occurs rarely, usually after deep subcutaneous injections, typically in the abdominal wall. If present, this should raise a clinical suspicion for HIT. 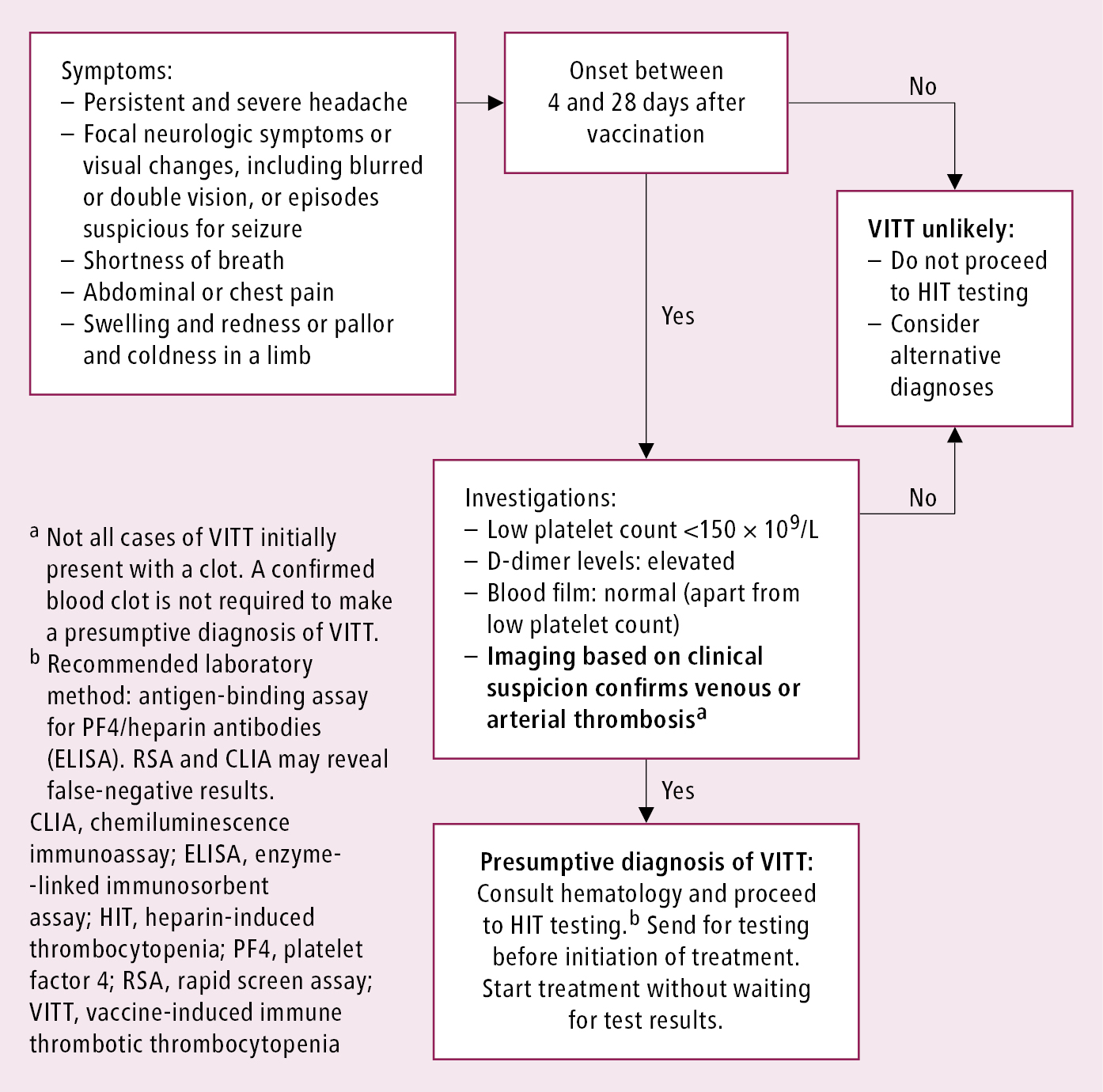