The perioperative management of patients who are receiving a direct oral anticoagulant (DOAC) and require an elective surgery or invasive procedure is a common clinical problem. In assessing these patients, the task of the clinician is (1) to determine if DOAC interruption is needed, and (2) to provide advice on how to interrupt and resume DOACs perioperatively.

There are several minor procedures, classified as being minimal bleeding risk, where DOACs can be continued without complete interruption. These procedures consist of dental extractions, endodontic (root canal) procedures, skin biopsies, phacoemulsification (cataract) surgery, and selected colonoscopies. Implantation of a cardiac pacemaker or internal defibrillator (ICD) as well as cardiac catheterization can be done without stopping DOACs. However, there are several points to note in the management of such patients:

1) Any of these procedures could be considered as having a higher bleeding risk, warranting full anticoagulant interruption. For example, a tooth extraction in a patient with poor dental or gingival hygiene or cataract surgery with retrobulbar instead of topical anesthesia may not be considered minimal bleeding risk.

2) It is suggested to skip the morning DOAC dose just before the procedure, because if a DOAC is taken on the day of the procedure the peak anticoagulant effect—occurring 1 to 3 hours after intake—may coincide with the timing of the procedure and may increase the risk for bleeding.

3) In patients having coronary angiography using a femoral approach, continuing DOACs may not be advisable as such patients are at increased risk for developing an inguinal hematoma or false aneurysm.

4) In patients having a colonoscopy, DOACs can be continued in situations where the need for polypectomy is unlikely, whereas interruption would be required if the likelihood of polypectomy is higher. A discussion with the clinician performing the colonoscopy can ensure optimal anticoagulant management.

5) In dental procedures oral tranexamic acid mouthwash can be used just before and 2 to 3 times daily for 1 to 2 days after the procedure to reduce bleeding, since such bleeding may not be clinically important but may cause distress to patients.

In patients who are receiving a DOAC and require treatment interruption for an elective surgery or invasive procedure, patient management depends on the bleeding risk associated with the surgery or procedure (table 3.1-1). The thromboembolic risk is less important because DOACs have a rapid offset and onset of action (cessation and resumption of the therapeutic effect), and a short (2-4 days) interruption interval perioperatively is unlikely to substantially increase the risk for thromboembolism.

A high-bleeding-risk surgery or procedure comprises major abdominal surgery (eg, cancer resection); major thoracic surgery; major orthopedic surgery; and any cardiac, spinal, or intracranial surgery. Any patient having neuraxial anesthesia is classified as high bleeding risk because of the small but important risk for epidural hematomas, which can cause lower limb paralysis. A low- to moderate-bleeding-risk surgery or procedure includes most surgeries that typically are <1 hour in duration and do not involve neuraxial anesthesia.

1) Patients having a high-bleeding-risk surgery or procedure should discontinue DOACs for 2 full days (ie, ≥48 hours) before the procedure, which in most cases corresponds to a 60- to 68-hour interval between the last DOAC dose and the time of surgery (fig. 3.1-2). For example, if a patient is having a high-bleeding-risk surgery or procedure on a Monday at 8:00 and takes their last DOAC dose at 18:00 on the preceding Friday, this represents a 62-hour interval between the last dose and the surgery. With this interruption interval, there would be minimal or no residual anticoagulant effects at the time of the surgery, given the 12- to 15-hour half-life of DOACs.

2) Patients having a low- to moderate-bleeding-risk surgery or procedure should discontinue DOACs for 1 full day before the procedure, which would correspond to a 36- to 42-hour interval between the last DOAC dose and the surgery (fig. 3.1-3).

In all patients no DOAC is taken on the day of the surgery or procedure. The exception to this approach is patients who are receiving dabigatran and have moderately to severely impaired renal function (creatinine clearance <50 mL/min): Because dabigatran is excreted mainly by the kidney (80%), a longer interruption interval of 4 days is needed before a high-bleeding-risk surgery or procedure and 2 days before a low- to moderate-bleeding-risk surgery/procedure.

2. Postoperative management: After the surgery or procedure, the resumption of DOACs should, in effect, mirror the preoperative interruption. After a low- to moderate-bleeding-risk surgery or procedure, ≥24 hours should elapse before resuming DOACs (ie, resume the day after the surgery/procedure) and 48 to 72 hours should elapse before resuming DOACs after a high-bleeding-risk surgery/procedure.

The overall management approach can be summarized as: “1 day off before and after a low- to moderate-bleeding-risk surgery/procedure and 2 days off before and after a high-bleeding-risk surgery/procedure.” The exception to this approach is patients who are receiving dabigatran with a creatinine clearance <50 mL/min, as they require an additional 1 to 2 days of interruption before a surgery or procedure to allow adequate time for drug clearance.

There are some points to note about postoperative DOAC management:

1) The 48- to 72-hour resumption interval can be extended if the postoperative bleeding is more than expected, which is important because the full anticoagulant effect of DOACs is almost immediate after oral intake.

2) In patients who are unable to take medications by mouth and who are at high risk for venous thromboembolism, low-dose subcutaneous low-molecular-weight heparin (LMWH) can be given for the first 1 to 3 postoperative days. 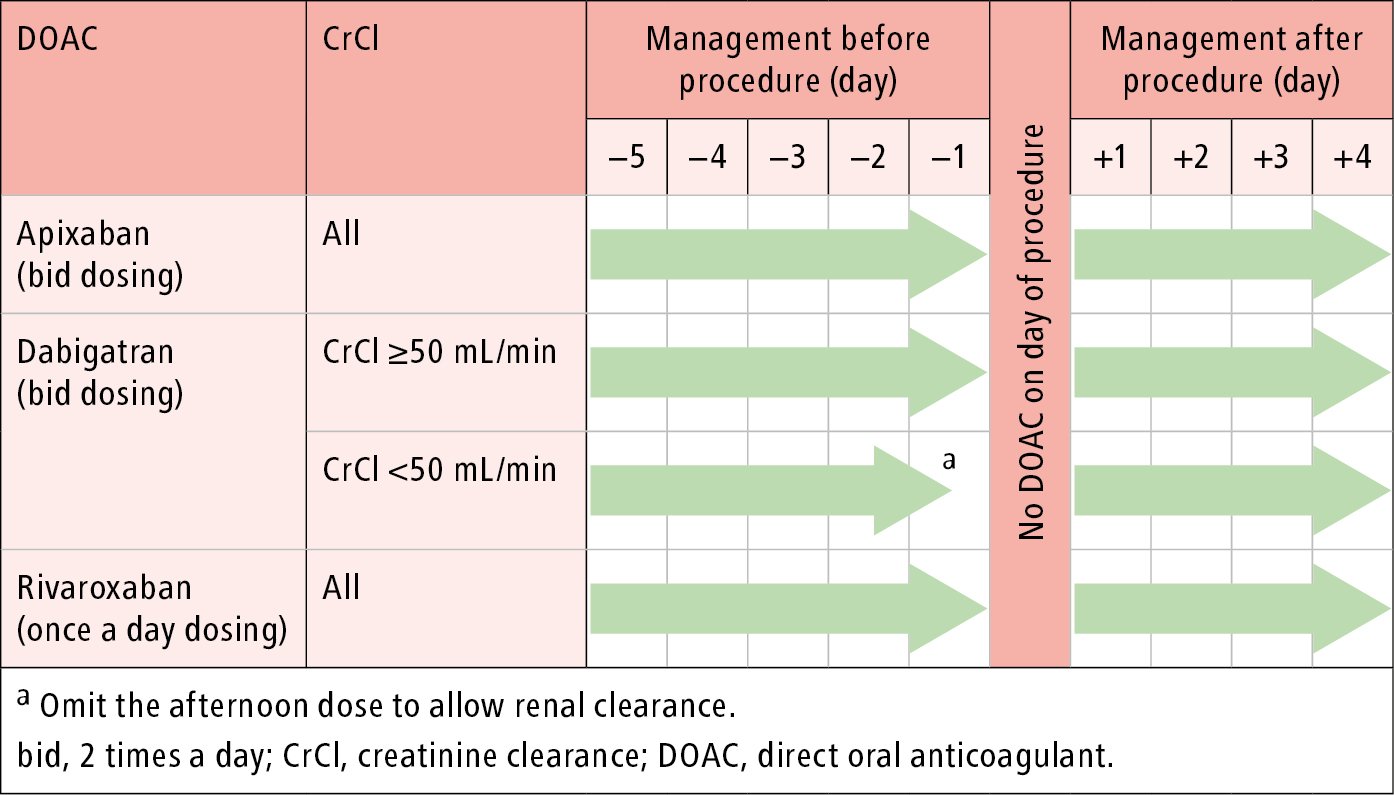 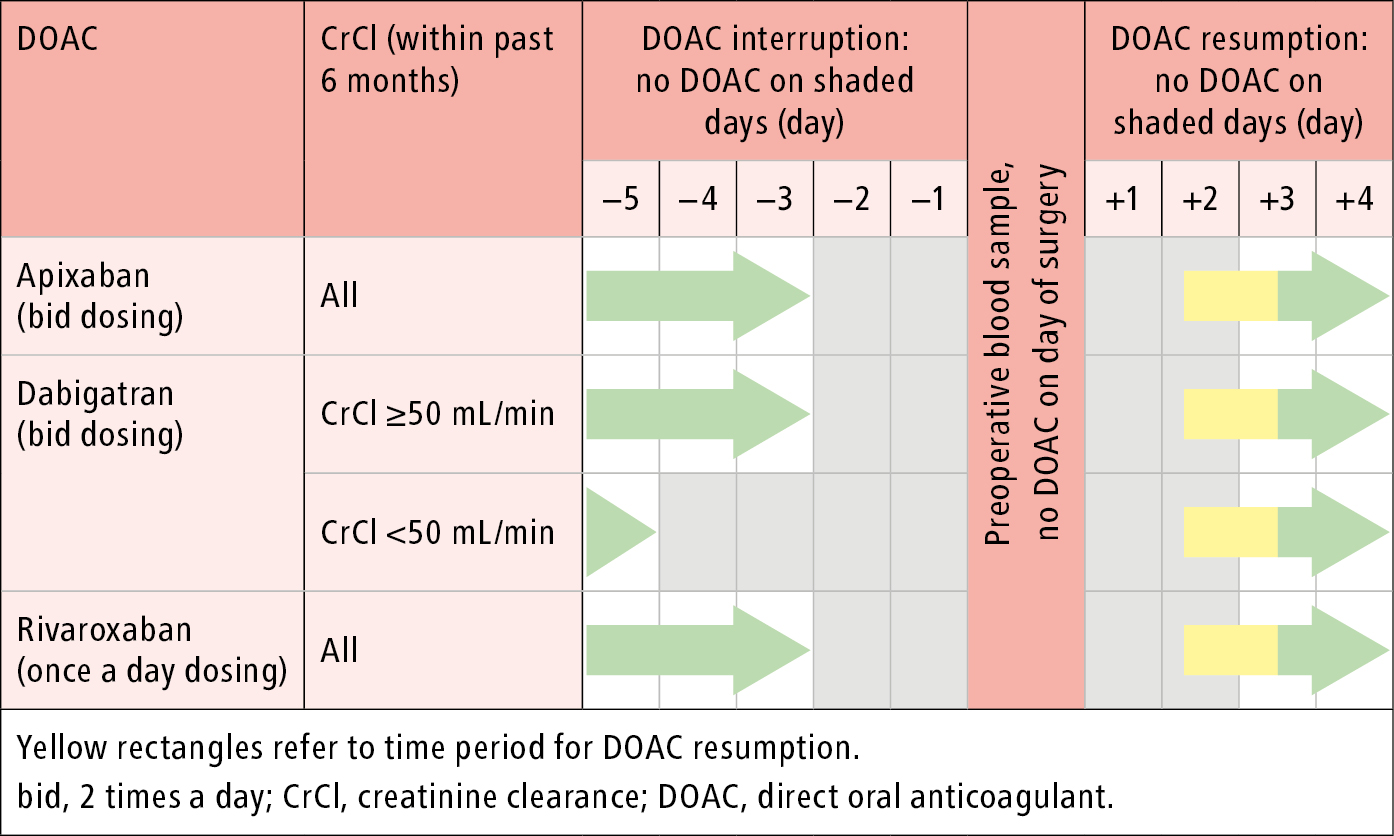 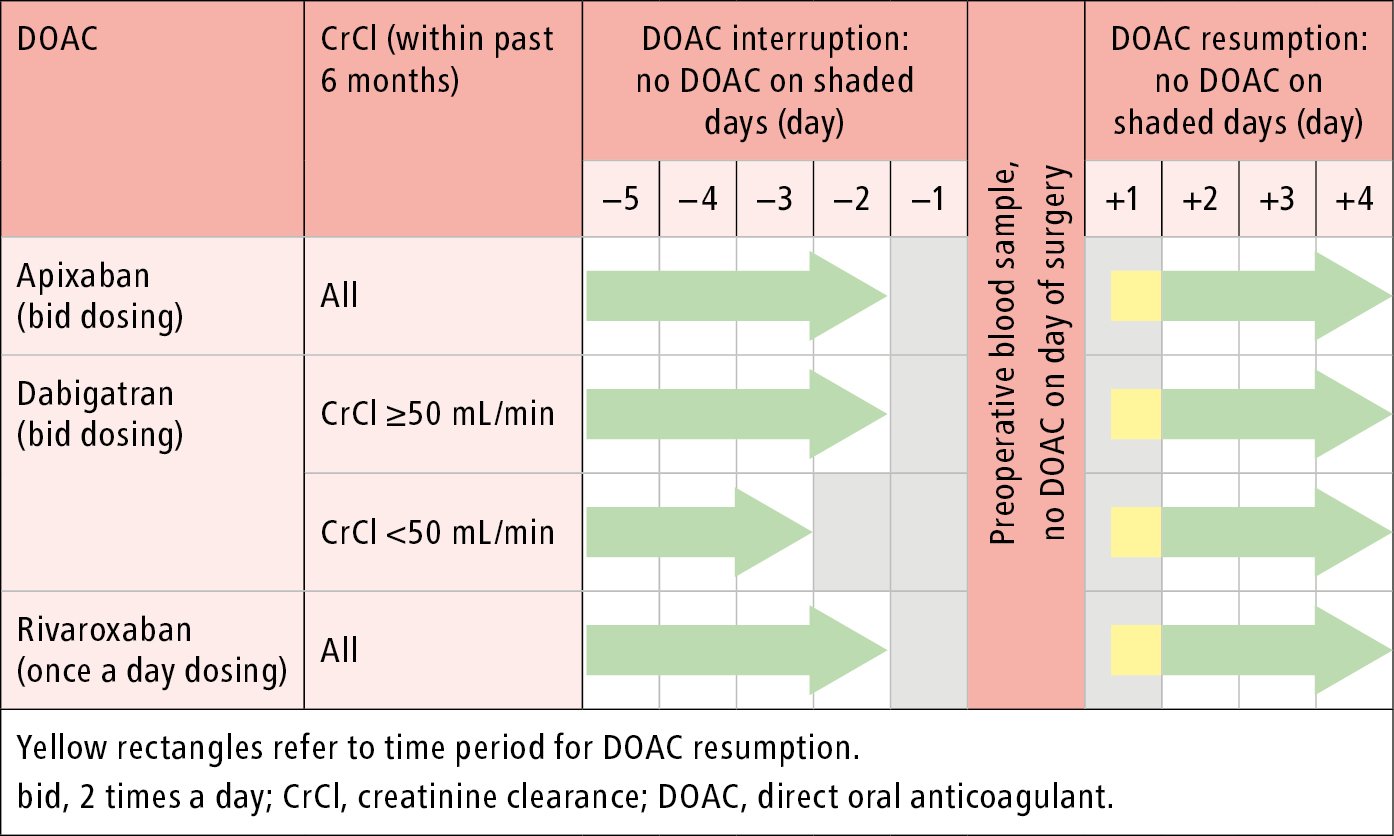