Acetaminophen (INN paracetamol) poisoning is usually a result of an intentional (suicidal) overdose of oral formulations but may be also accidental from high doses taken for analgesia or due to accumulation of the drug in patients with severe liver disease. Ten-fold errors in the administration of parenteral acetaminophen have also resulted in toxicity.

Peak serum acetaminophen levels after oral ingestion of tablets or capsules occur after 2 to 4 hours. Hepatotoxicity can occur in adults who take a single dose of 6 to 7 g and toxicity may occur with ingestion of 150 mg/kg/d for ≥2 days.

Phase 1 (up to 24 hours from ingestion) is asymptomatic in most patients. Some individuals may have nausea and vomiting or, less frequently, abdominal pain, excessive sweating, pallor, and weakness. In very rare cases severe manifestations (coma, severe lactate acidosis) develop as early as on the first day from ingestion; this is characteristic for severe overdoses (75-100 g).

Phase 3 (72-96 hours): Fulminant liver failure with encephalopathy and less frequently bleeding. An increase in serum creatinine levels is usually observed on days 2 to 5 from ingestion.

Serum acetaminophen levels should be measured not earlier than 4 hours from ingestion. If the level is drawn within 4 hours, it should be repeated at the 4-hour mark, unless it was nondetectable. If the level at 4 hours is borderline or there is suspected delayed absorption, measurement should be repeated at 8 hours. It is crucial to measure acetaminophen levels at 4 to 8 hours from ingestion and administer the antidote (N–acetylcysteine [NAC]), as its efficacy is highest in this period.

The Ontario Poison Center has recently changed its recommended management and testing protocol for acetaminophen poisoning. The current recommendations are as follows:

1) On initial presentation of all patients with suspected acetaminophen overdose:

a) Acetaminophen level (≥4 hours after the end of ingestion).

2) Sustained-release preparations or when opioid or anticholinergic drugs were ingested concurrently: Repeat the acetaminophen level every 4 hours until it peaks, then repeat measurements every 12 hours until the level is undetectable (<66 micromol/L [10 microg/dL]).

b) Repeat the acetaminophen level every 12 hours until it is undetectable.

4) Patients determined to be at severe risk:

a) Lactate and lipase levels.

b) Phosphate (PO4) levels if liver enzymes are elevated.

Based on recent literature suggesting safer administration and easier dosing strategies, the Ontario and Manitoba Poison Control Centre has changed its suggested dosing for NAC. The solution concentration has been standardized to minimize preparation errors and the loading dose is the same for both high-risk and low-risk (typical) patients.

A standard NAC solution of 30 mg/mL is prepared for all patients. At our site, this is prepared by adding 15,000 mg of NAC to achieve a total volume of 500 mL in a bag of 5% glucose (dextrose). The loading dose is 60 mg/kg/h for 4 hours (a maximum dose based on 100 kg). Maintenance dosing is continued for ≥12 hours or until the criteria for stopping are met.

4) The patient is well; and

5) A minimum of 12 hours (including the loading dose) of NAC has been given.

3. Methods of enhanced elimination: Hemodialysis. In patients with severe acetaminophen overdose (serum drug levels >5300 micromol/L [5.3 mmol/L]) associated with coma and metabolic acidosis, consider urgent hemodialysis; use a higher rate of NAC infusion (see above) for patients requiring dialysis. There are no established criteria for starting hemodialysis in patients with acetaminophen toxicity and it is not routinely used. Therefore, the decision to proceed with this intervention should be closely discussed with toxicology nephrology services. 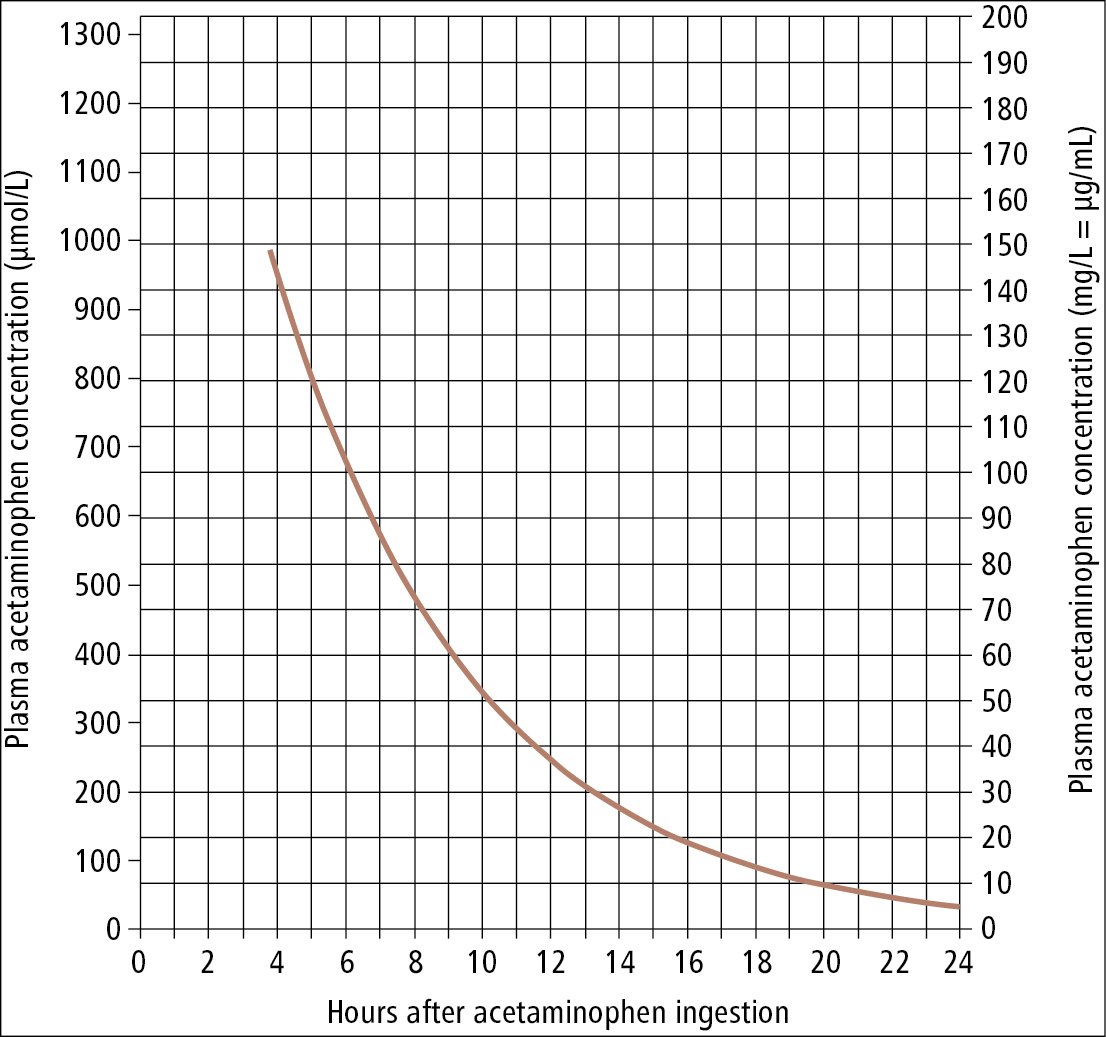 Figure 19.2-1. A decision-making nomogram for the use of antidotes in the treatment of acetaminophen overdose based on serum acetaminophen levels and time from ingestion. Adapted from protocols by the Ontario Poison Centre.