Cushing syndrome is a clinical syndrome composed of signs and symptoms resulting from longstanding exposure of tissues to excess glucocorticoids.

Subclinical Cushing syndrome refers to a minor excess of glucocorticoids due to increased cortisol secretion by an adrenal tumor that results in inhibition of glucocorticoid secretion by the contralateral adrenal gland, milder clinical presentation, and absence of signs common to overt Cushing syndrome (eg, supraclavicular fullness caused by fat pads).

Cushing syndrome is classified based on etiology.

1. Exogenous Cushing syndrome is caused by administration of glucocorticoids at doses exceeding their physiologic levels. This is the most common cause of excess glucocorticoids.

b) Macronodular adrenal hyperplasia is caused by ectopic receptors in the adrenal cortex, which are activated by atypical stimuli; most commonly, they are activated by the gastric inhibitory peptide (GIP)—currently called the glucose-dependent insulinotropic peptide—which is secreted postprandially in the gastrointestinal tract. Other stimulating factors include catecholamines, antidiuretic hormone, thyroid-stimulating hormone, luteinizing hormone, human chorionic gonadotropin, follicle-stimulating hormone, high levels of estrogens, prolactin, and interleukin 1.

c) Micronodular adrenal hyperplasia (primary pigmented nodular adrenal disease [PPNAD]) is a familial genetic disease. It may either be part of Carney complex, which includes various other abnormalities (cutaneous, cardiac, or breast myxoma; light-brown cutaneous nevi; testicular tumors; less commonly other endocrine abnormalities, such as acromegaly), or it may be the sporadic type, where immunoglobulins stimulating hyperplasia of the adrenal cortex may play a role. Like in other ACTH-independent types of Cushing syndrome, the adrenal tissue between the nodules may be atrophic.

Signs and symptoms are unspecific but some are more distinctive than others.

2. Signs: Presence of purple striae, facial plethora (due to polycythemia and thinned skin) and dilated vessels, facial fullness (“moon face”), dorsocervical fat pad (“buffalo hump”), supraclavicular fullness caused by fat pads, thin extremities, thin skin, easy bruising, sometimes spontaneous cutaneous hemorrhages or purpura. Other consequences of cortisol excess can be present, but these are also common in the general population (eg, obesity, depression, diabetes mellitus, hypertension, hyperandrogenism). The presence of thin skin (<2 mm) markedly increases the probability of Cushing syndrome; similarly, patients who have ≥3 nontraumatic ecchymoses that are >1 cm in diameter are a few times more likely to have Cushing syndrome than patients without such findings.

3. Natural history: Overt Cushing syndrome is diagnosed only in the advanced stage of a chronic disease. Significantly more often, just some of the manifestations are present, such as impaired glucose tolerance or diabetes, dyslipidemia, hypertension, and rapid body weight gain (obesity), which constitute metabolic syndrome. The risk of osteoporosis is also increased. For these reasons, screening hormone tests for Cushing syndrome should be considered in patients, especially young, who have been unsuccessfully treated for metabolic syndrome or its components (eg, hypertension).

Biochemical evaluation is recommended in patients with:

Screening in the general population is discouraged.

Before beginning biochemical evaluation for hypercortisolism, take a detailed history of drug use to exclude exogenous glucocorticoid exposure that could explain signs and symptoms.

3. Confirming hypercortisolism: Note that different collection methods and assays available for the measurement of cortisol exist and results may vary. When performing a diagnostic workup, it is important to evaluate the assays available at each center and carefully collect samples for testing.

2) Elevated midnight serum cortisol levels >50 nmol/L (1.8 microg/dL) if the blood sample has been collected within 5 to 10 minutes of awakening or, where available and standardized, late-night salivary cortisol levels (>4 nmol/L [145 ng/dL] at 23:00 to midnight).

4. Diagnostics of causes of high serum cortisol levels: Once hypercortisolism is documented, the next diagnostic step is to determine if it is ACTH-dependent (ACTH-secreting tumor) or ACTH-independent (adrenal). This is done by measuring serum ACTH levels.

2) The CRH stimulation test involves stimulation of ACTH secretion and indirect stimulation of cortisol secretion with CRH. In Cushing disease (which is ACTH-dependent) a characteristic several-fold elevation in ACTH levels is seen after the administration of CRH, but in the case of markedly increased baseline values, an increase in ACTH level by ≥35% to 50% and cortisol by ≥14% to 20% is considered significant. In ACTH-independent Cushing syndrome usually no response to CRH is seen or it is minor only.

3) The 8-mg dexamethasone suppression test (2 mg every 6 hours for 2 days) is considered unreliable and is now rarely used; it played a role in the differentiation between Cushing disease (ACTH-dependent pituitary disease) and autonomous adrenal cortisol hypersecretion (functioning adrenal tumor, ectopic ACTH secretion, or nodular adrenal hypertrophy). In patients with Cushing disease urinary excretion of cortisol and its metabolites usually decreases by ≥50%, whereas in patients with autonomous cortisol secretion no suppression is seen. The test result is not reliable in patients with tumors causing ectopic ACTH secretion.

4) The adrenal response to atypical stimuli could be assessed in patients with suspected macronodular adrenal hyperplasia; this is performed in specialized centers. Measure serum cortisol levels at baseline and at 30, 60, 90, and 120 minutes after breakfast or oral intake of 75 g of glucose; after standing up; after oral administration of 10 mg of metoclopramide, or after IV administration of 100 microg of gonadotropin-releasing hormone (GnRH) or 200 microg of thyrotropin-releasing hormone (TRH). The diagnosis is supported by an increase in serum cortisol levels.

5. Imaging studies: CT is the first choice for the evaluation of the adrenal gland in Cushing syndrome. CT helps distinguish between tumors and hyperplasia and in most cases can differentiate between adrenal adenomas and carcinomas. Magnetic resonance imaging (MRI) is a good option when CT is contraindicated or unavailable. Skeletal radiographs may reveal features of osteoporosis and pathologic fractures; delayed bone age is frequently seen in children and adolescents. Dual-energy x-ray absorptiometry (DXA) may reveal features of osteopenia or osteoporosis, particularly in the lumbar spine and proximal femur. Receptor scintigraphy with somatostatin analogues is used in specialized settings to detect neuroendocrine neoplasms causing ectopic ACTH secretion and to diagnose asymmetric hormone functioning of bilateral adrenal tumors.

CT and MRI of the adrenal glands reveal findings dependent on the cause of Cushing syndrome (Figure 6.1-1):

3) Micronodular adrenal hyperplasia: CT and MRI reveal symmetric adrenal glands that are small or of normal size. Diagnosis is established during surgery (characteristic yellow-black color of the nodules caused by lipofuscin deposition).

6. Bilateral inferior petrosal sinus sampling (or bilateral jugular vein sampling, which is simpler and safer) is occasionally used in highly specialized settings. It relies on relative left/right ACTH level, measured with or without CRH stimulations. Indications and interpretation of the results are outside of the scope of this text.

2. Subclinical Cushing syndrome: The earliest and longest-lasting abnormality is inadequate suppression of late-night cortisol levels. Suppression with dexamethasone is impaired, while morning blood and salivary cortisol levels and UFC excretion may approach or slightly exceed the ULN. The most important diagnostic findings are considered to be the reduction of morning plasma ACTH levels below the lower limit of normal (LLN) and inadequate suppression of cortisol secretion by dexamethasone (serum cortisol levels >83 nmol/L [3 microg/dL] in the overnight suppression test with dexamethasone 1 mg). This type of Cushing syndrome is diagnosed in a small proportion of incidentally detected, usually unilateral autonomous tumors of the adrenal cortex. A small group of patients who undergo unilateral adrenalectomy for an apparently nonfunctioning adrenal tumor are retrospectively diagnosed with subclinical Cushing syndrome based on secondary adrenal insufficiency of the remaining adrenal gland in the postoperative period.

1) Glucocorticoid resistance: A syndrome of partially impaired response of the glucocorticoid receptor (a rare genetic condition). It is associated with high serum ACTH, cortisol, androgen, and aldosterone levels without symptoms of excess cortisol, with features of androgenization and aldosteronism in women. The circadian rhythm of cortisol secretion as well as pituitary and adrenal response to CRH are preserved. Treatment: Dexamethasone 1 to 1.5 mg/d to suppress ACTH secretion.

c) Alcohol dependence: Few patients have clinical features of Cushing syndrome (because of altered cortisol metabolism in the liver and effects of alcohol on the central nervous system). Abstinence results in resolution of symptoms.

d) Anorexia nervosa: Elevated cortisol levels, mainly as a result of decreased renal clearance of cortisol. An increase in ACTH secretion may also occur. Impaired dexamethasone suppression caused by acquired glucocorticoid-receptor resistance is present, which explains the lack of any features of adrenal overproduction of glucocorticoids.

This depends on the etiology of Cushing syndrome.

2. Macronodular or micronodular adrenal hyperplasia: The treatment of choice is resection of both adrenal glands. Administer hydrocortisone as in patients after resection of an adenoma.

Regardless of etiology, patients with long-standing Cushing syndrome may develop vascular complications of hypertension.

1. Resection of pituitary adenoma or adrenal adenoma results in complete resolution of Cushing syndrome. Periodic replacement therapy may be needed.

2. Bilateral adrenalectomy in patients with micronodular and macronodular adrenal hyperplasia results in resolution of symptoms of Cushing syndrome, but lifelong glucocorticoid replacement therapy is necessary. In patients with Carney complex, the prognosis depends on coexisting abnormalities.

3. In patients with adrenocortical carcinoma, the prognosis depends on the stage of cancer and extent of surgery. Patients after bilateral adrenalectomy require lifelong replacement therapy. 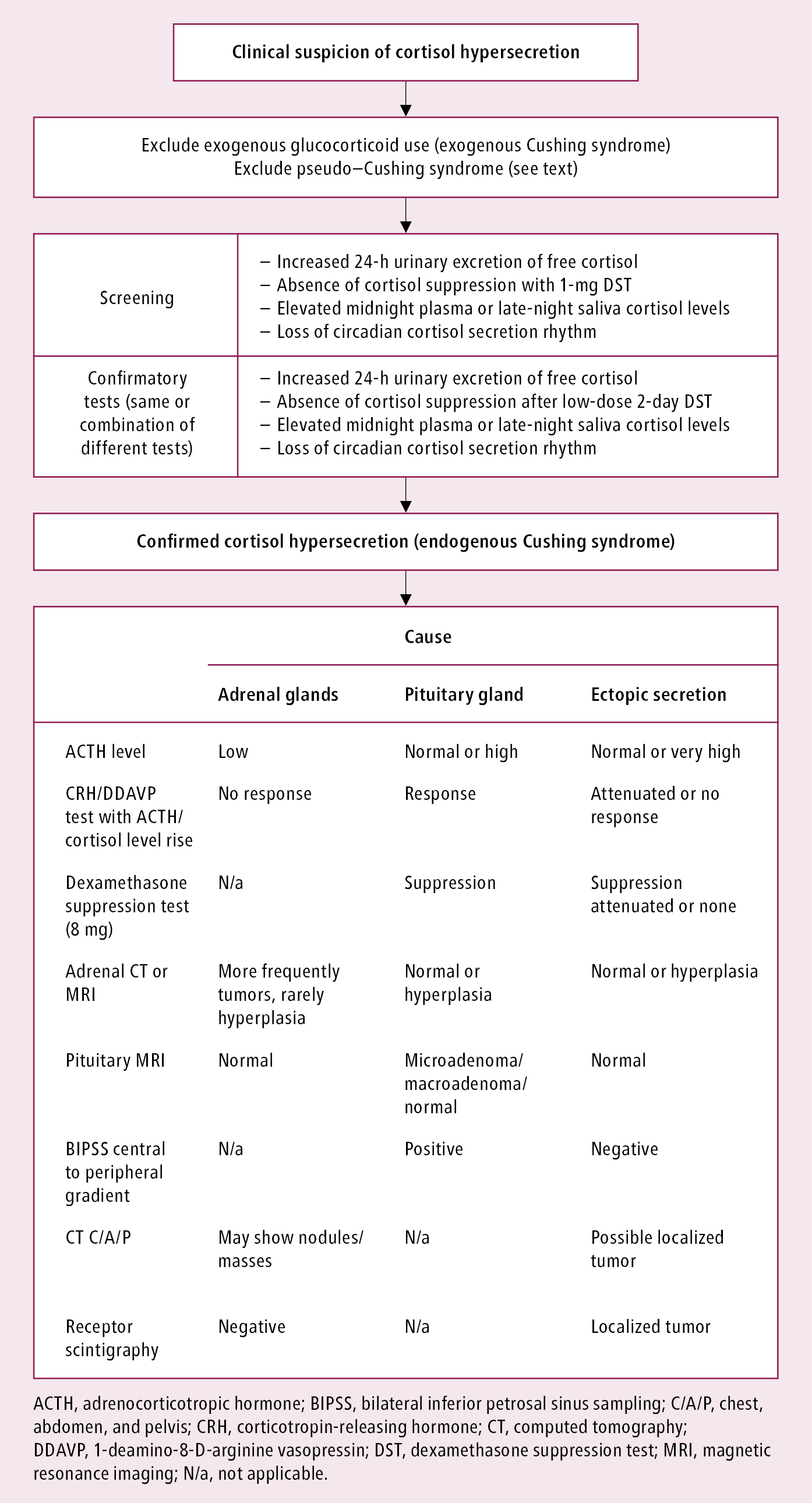