Angioedema is edema of the subcutaneous or submucosal tissue resulting from vasodilation and increased vascular permeability. Most frequently it develops over several minutes to hours and is well demarcated and asymmetric. Angioedema is typically located on the eyelids, lips (Figure 2.3-1), genital area, distal limbs, and in the mucosa of the upper respiratory and gastrointestinal (GI) tracts.

b) Associated with angiotensin-converting enzyme inhibitors (ACEI-AAE): Due to inhibition of bradykinin degradation.

b) Associated with mutations of factor XII (FXII-HAE) (autosomal dominant).

1. Angioedema associated with urticaria may appear in any location, although it most frequently affects the face, extremities, and genital areas. In severe cases edema of the tongue, pharynx, or larynx may lead to life-threatening acute respiratory insufficiency. Symptoms of nonallergic angioedema (eg, induced by NSAIDs) are the same as in allergic angioedema.

2. C1-INH-HAE or C1-INH-AAE: C1-INH-HAE type I or type II usually presents in the first or second decade of life and is recurrent. Signs and symptoms may appear spontaneously, but in ~50% of patients they are triggered by an inducing factor: stress, minor trauma (eg, dental procedure), menstruation, pregnancy, use of certain drugs (eg, oral contraceptives, ACEIs), or infection. The majority of patients have prodromal symptoms (mood changes, anxiety, fatigue).

Usually a solitary, well-demarcated, focal edema is present, but less frequently there may be a few small lesions. About half of the patients develop a red rash called erythema marginatum. The skin in the edematous area is usually pale. Edema extends slowly over 12 to 24 hours and resolves spontaneously within 8 to 72 hours. Pruritus is absent.

Even the first episode of submucosal edema of the tongue, pharynx, or larynx (presenting as sensation of a lump in the throat, hoarseness, dysphagia, and dyspnea) may cause acute respiratory insufficiency and be life-threatening. Acute edema of the intestinal wall may cause abdominal pain, nausea, vomiting, and subsequent diarrhea. A sudden pain attack may resemble acute abdomen (improvement with administration of C1-INH concentrate allows one to differentiate acute abdomen from angioedema).

Symptoms of C1-INH-AAE are the same as in C1-INH-HAE, but there is no history of familial occurrence and symptoms of angioedema may precede other features of systemic disease for several months.

3. FXII-HAE affects mainly women. Symptoms develop in puberty, after starting hormonal contraceptives or hormone replacement therapy, or in pregnancy. With age, symptoms become less frequent and less severe and may resolve completely at the age of 70 to 80 years.

4. ACEI-AAE develops in 0.3% of patients receiving ACEIs and in 0.13% of patients receiving angiotensin receptor blockers (ARBs). It more often affects women and persons aged >65 years and is 3 to 4 times more frequent in black patients compared with white patients. In ~50% of individuals ACEI-AAE occurs during the first week of treatment and is not related to the type or dose of the ACEI/ARB. It can occur even after a year of being on therapy. Edema usually involves the entire face, mouth, tongue, and respiratory tract; it may also affect the GI mucosa. For patients who develop angioedema when taking an ACEI, the risk of development of any subsequent angioedema when taking an ARB is between 2% and 17%; for confirmed angioedema, the risk is from 0% to 9.2%.Evidence 1Moderate Quality of Evidence (moderate confidence that we know true effects of the intervention). Quality of Evidence lowered due to imprecision. A more recent paper from Caldiera et al (see below) found the risk to be no different than with placebo. Haymore BR, Yoon J, Mikita CP, Klote MM, DeZee KJ. Risk of angioedema with angiotensin receptor blockers in patients with prior angioedema associated with angiotensin-converting enzyme inhibitors: a meta-analysis. Ann Allergy Asthma Immunol. 2008 Nov;101(5):495-9. doi: 10.1016/S1081-1206(10)60288-8. PubMed PMID: 19055203.Caldeira D, David C, Sampaio C. Tolerability of angiotensin-receptor blockers in patients with intolerance to angiotensin-converting enzyme inhibitors: a systematic review and meta-analysis. Am J Cardiovasc Drugs. 2012 Aug 1;12(4):263-77. doi: 10.2165/11599990-000000000-00000. Review. PubMed PMID: 22587776.

Diagnostic workup in angioedema associated with urticaria (urticaria excludes the diagnosis of C1-INH-HAE and C1-INH-AAE, although it is possible to have both conditions): see Urticaria. In patients without concomitant urticaria, it is necessary to establish whether any ACEIs, ARBs, or NSAIDs are currently used. Take a careful history, including familial occurrence of angioedema. Diagnostic workup in suspected C1-INH deficiency: Figure 2.3-2.

In patients aged >30 years consider malignancy (the most common types for given age and sex) and systemic connective tissue disease.

It is crucial to exclude acute anaphylaxis and laryngeal edema.

Treatment of an angioedema attack depends on the location of edema. Edema situated peripherally (hands, feet, genital area) may not require urgent treatment.

1. In case of risk of acute respiratory insufficiency: In patients with stridor or significant edema of the face and upper airways (edema of the tongue, oral mucosa, and throat mucosa; hoarseness), consider urgent endotracheal intubation. In angioedema associated with urticaria, management is the same as in anaphylaxis unless the patient also has HAE (see below). Patients with acute edema of the pharynx and upper airways should be monitored for ≥24 hours.

2. Angioedema associated with urticaria (eg, after the administration of NSAIDs): see Urticaria.

3. IH-AAE: Administer IV or oral glucocorticoids and IM epinephrine. Use antihistamines as prophylaxis.

4. InH-AAE: Antihistamines, glucocorticoids, and epinephrine are ineffective (but should be used if the type of angioedema is unknown). As prophylaxis, consider administering oral tranexamic acid up to 3 g/d. There are case reports of plasma-derived C1-INH (pdC1-INH) and icatibant being effective and these could be tried if angioedema is life threatening (see below).

5. C1-INH-HAE type I and type II, C1-INH-AAE: Epinephrine, antihistamines, and glucocorticoids are not effective unless the patient also has atopy and the event was triggered by an allergic reaction (however, they should be used if the type of angioedema is unknown). Treatment depends on the severity of angioedema:

1) pdC1-INH (brand names: Berinert, Cinryze) is the treatment of choice in life-threatening angioedema (mainly in laryngeal angioedema). It may be also considered in patients with severe intestinal wall edema. One unit of pdC1-INH is an equivalent of the amount of C1-INH in 1 mL of human plasma. Dosage: Berinert 20 IU/kg in a rapid IV infusion is used in the treatment of HAE types I and II in adults, children, and infants; Cinryze 1000 IU in a rapid IV infusion is approved for use prophylactically in HAE types I and II in patients aged >12 years.

In patients >12 years you may also use conestat alfa, a recombinant human C1-INH analogue. Dosage: In individuals <84 kg use 50 IU/kg IV; in individuals ≥84 kg administer 4200 IU as a single IV injection.

a) Ecallantide is a recombinant, selective, highly potent plasma kallikrein inhibitor, not approved in the European Union. The onset of action is 30 minutes to 4 hours after administration.

b) Icatibant is a selective bradykinin B2 receptor antagonist. A dose of 30 mg subcutaneously is approved for HAE types I and II in patients >18 years old. The median time to 50% symptom reduction for icatibant is 2 to 2.3 hours. There are case reports showing it is helpful for other forms of angioedema and a study showing benefit for ACEI-associated angioedema. Icatibant can be used in patients aged ≥2 years with weight-based dosing.

3) Attenuated androgens: Stanozolol up to 16 mg/d, oral danazol up to 600 mg/d. These agents may be used preventatively. There are no studies in which they were used acutely to treat attacks. In the majority of patients symptoms may be controlled with danazol 50 to 200 mg administered daily or every 2 days. Attenuated androgens may be used in patients with peripheral edema or intestinal wall edema to accelerate the regression of symptoms. Do not use them in the first and second trimesters of pregnancy or in children.

4) Fresh frozen plasma (FFP) 400 mL may be used only in exceptional cases when C1-INH concentrate is not available. Paradoxically, it may aggravate the symptoms of angioedema by providing more substrate.

6. FXII-HAE: Resolution of angioedema within 1 to 2 hours of the administration of icatibant has been reported. Data on the efficacy of danazol are contradictory.

a) Prophylaxis is not necessary if C1-INH concentrate is directly available for acute use, but it could be administered.

b) In other cases use danazol 2.5 to 10 mg/kg/d (maximum, 600 mg/d) starting 5 days before the procedure and continuing until 2 days after the procedure.

a) C1-INH concentrate IV 1 hour before the procedure (dosage the same as in acute treatment of HAE [see above]). The next dose may be administered during surgery, if necessary. Injections may be repeated once daily until the risk of edema is reduced.

b) If C1-INH concentrate is not available, use danazol (dosage: see above); if this is also not available, administer FFP (10 mL/kg, 2 units of 400 mL in an adult) ≥1 hour before surgery.

4) Long-term prophylaxis: Use androgens (eg, danazol) or tranexamic acid (less effective than androgens). If these drugs are not available but C1-INH can be obtained, the patient may self-administer C1-INH concentrate in case of prodromal symptoms or regularly twice weekly to prevent attacks. A recent study showed pdC1-INH given subcutaneously in doses of 40 IU/kg and 60 IU/kg significantly reduced attacks. 60 IU/kg administered subcutanously twice a week is the approved prophylactic dose.

Note: Long-term use of androgens may lead to increased body weight, disturbances of the menstrual cycle and masculinization in women, decreased libido, acne, fatigue, headache, hypertension, cholestasis, and liver dysfunction. Monitor liver function and plasma lipid levels regularly. Do not use androgens during pregnancy, lactation, in patients with prostate cancer, or in children who have not reached Tanner stage 3.

4. C1-INH-AAE: Treatment is the same as in C1-INH-HAE types I and II (see above). Treatment of the underlying disease is necessary. In some patients plasmapheresis and administration of cytotoxic drugs, androgens, and tranexamic acid may be required. 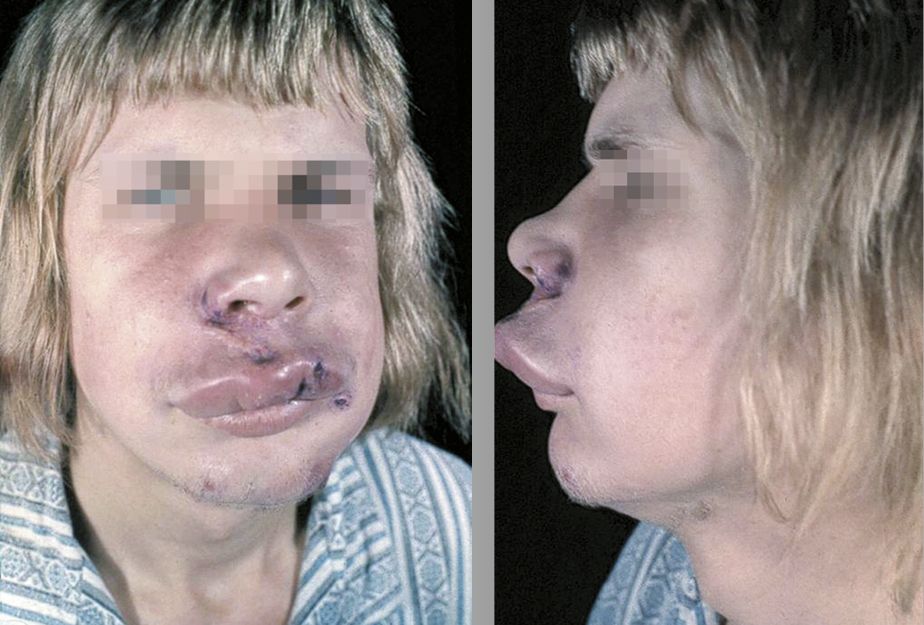 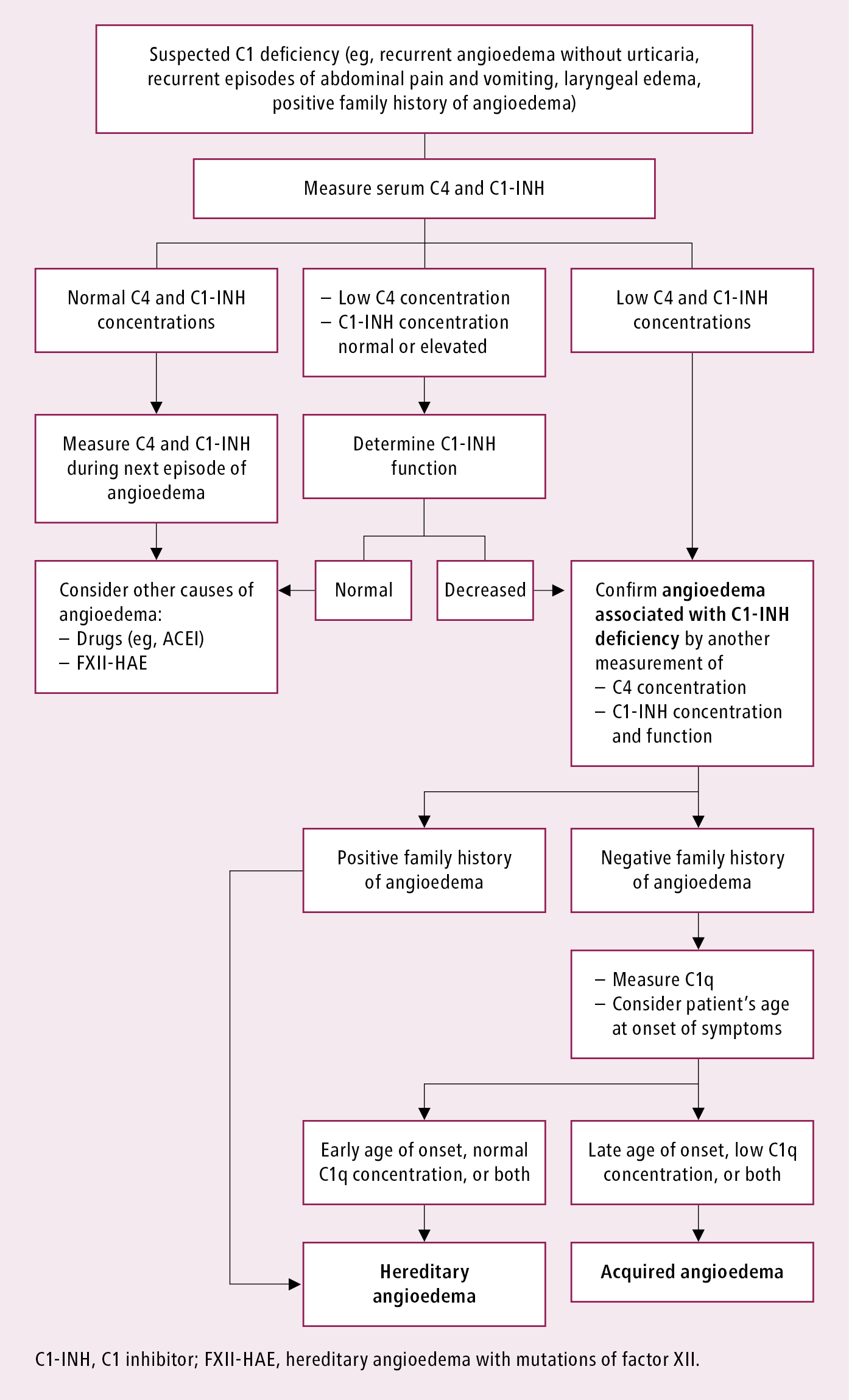