The staging of PAD is based on the severity of symptoms: Table 3.20-5.

PAD is often accompanied by features of atherosclerosis of other arteries: coronary, cranial, or renal. Sometimes patients have a coexisting abdominal aortic aneurysm.

1. Symptoms: Early PAD is asymptomatic. With time, patients develop easy fatigability of the limbs, increased sensitivity to cold, and paresthesia. They usually seek medical attention because of intermittent claudication, that is, pain occurring relatively regularly after defined physical exercise (eg, walking a certain distance). The pain, sometimes described as muscle numbness or stiffness, involves muscles below the level of artery stenosis/occlusion, is not referred, forces the patient to stop walking, and resolves spontaneously after several seconds or minutes of rest. Claudication pain usually involves large muscle groups of the lower extremity, such as the buttocks, thighs, and most frequently the calf. Claudication of the foot (deep pain in the middle of the foot [short flexor muscles of the foot]) occurs rarely and results from narrowing or occlusion of the more distal arteries in the lower leg (tibial arteries) or foot. It can be seen in conditions such as thromboangiitis obliterans (Buerger disease) and diabetes mellitus. Severe narrowing or occlusion of the aorta, iliac arteries, or both may present as Leriche syndrome, which is defined as intermittent claudication, absent femoral pulses, and erectile dysfunction.

In advanced stages patients complain of foot pain, leg pain, or both occurring at night (often hanging the limb over the side of a bed to keep it in the lowest possible position and allow gravity to improve blood flow) or pain at rest throughout the day and night.

2. Signs: The skin of the feet is pale or cyanotic (especially when standing) and cold. In advanced PAD trophic lesions (discoloration, hair loss, ulcers, necrosis) may be present. Patients also have muscle atrophy and a weak, absent, or asymmetric pulse over the arteries below the stenosis/occlusion, sometimes with a vascular bruit over the large arteries of the extremities. On the lower extremities, pulse is assessed on the following arteries: the dorsalis pedis artery (on the dorsum of the foot between the first and second metatarsal bone; not palpable in 8% of healthy persons), posterior tibial artery (behind the medial malleolus), popliteal artery (in the popliteal fossa), and femoral artery (in the groin, just below the inguinal ligament).

1. Ankle-brachial index (ABI) (Figure 3.20-4): A ratio of the systolic blood pressure (SBP) measured using continuous wave Doppler ultrasonography in the ankle to the SBP measured in the arm (if pressures vary between the arms, consider the higher value). A normal value is from 0.9 to 1.15; an ABI <0.9 indicates the presence of stenosis (in critical ischemia usually <0.5), while an ABI >1.3 is suggestive of abnormal arterial stiffness (eg, in patients with diabetes mellitus).

If tibial arteries cannot be compressed due to their stiffness, use the toe-brachial index (TBI) (Figure 3.20-5). The measuring principle is the same as in the ABI, but SBP is measured in the toe; the pressure measured in the toe should be ~10 mm Hg lower than the pressure measured at the level of the ankle. A normal TBI is >0.7; lower values indicate the possibility of lower limb ischemia.

2. Stress testing on a treadmill is performed in case of diagnostic doubts, particularly in patients with borderline ABI values, as well as to objectively assess the claudication distance. The ABI is calculated before and at the peak of exercise. If pain forcing the patient to interrupt testing is caused by ischemia, the ankle pressure after exercise will be significantly lower than before exercise (often <50 mm Hg).

3. Imaging studies: Arterial duplex ultrasonography of the arteries (including B-mode imaging [ultrasonography] and Doppler spectral waveform analysis) is the key method used in the initial diagnostics and for surveillance of patients with PAD, in particular those who have undergone surgical treatment (patency of prosthesis and bypasses) or endovascular interventions. The study should always be preceded by a thorough physical examination and ABI measurement. Computed tomography angiography (CTA) and magnetic resonance angiography (MRA) allow for the assessment of the entire vascular system and type of lesions in the vascular walls as well as qualification or planning of the patient for an appropriate invasive procedure; these studies should not be used for screening. Arteriography is performed in the case of diagnostic doubts or more commonly in the course of therapeutic endovascular procedures such as angioplasty (with or without stenting).

The diagnosis of PAD is made on the basis of symptoms, signs, and ABI (or the walking test). If arteries at the ankle cannot be compressed or if the ABI is >1.40, use alternative methods (eg, TBI or Doppler). Critical limb ischemia is diagnosed in a patient with chronic ischemia with pain at rest, necrosis, or ulceration (Fontaine classification stages III-IV or Rutherford stages 4-6).

1. Causes of chronic lower limb ischemia other than atherosclerosis: There are multiple other nonatherosclerotic causes of lower extremity arterial narrowing or occlusion that can present as chronic lower limb ischemia. Peripheral emboli from the heart (arrhythmias, valvular heart disease) or proximal arteries (plaque or aneurysms) may more typically present as acute ischemia but can also cause chronic symptoms. Inflammatory changes as well as thickening and narrowing of the artery wall and lumen can occur with large-vessel vasculitis, thromboangiitis obliterans (Buerger disease), and radiation injury (especially in iliac arteries following pelvic irradiation). Trauma can narrow arteries with dissection or chronic repetitive injury including external iliac artery endofibrosis (cyclist hip pain). The popliteal artery in particular can be extrinsically narrowed by muscles and tendons (popliteal artery entrapment) or adventitial cysts. Other rare congenital causes include coarctation of the aorta, fibrous dysplasia, and anomalous development of the lower extremity vasculature, such as arteriovenous malformations and persistent sciatic artery.

2. Differential diagnosis of intermittent claudication: There are many diseases or conditions (most often musculoskeletal or neurogenic) that can be confused with vascular claudication. Common conditions that may need to be differentiated from vascular discomfort: Table 3.20-6.

1. The treatment strategy is established on an individual basis depending on the severity of disease as well as the patient’s general condition, age, activity level (including type of occupation), and comorbidities.

2. Regular walking exercises: These are used to increase the claudication distance. Walk intensity should be adapted to the symptoms (it should not cause pain). We suggest that our patients walk at a slow to moderate pace until they feel some discomfort. Some suggest regular walking or cycling. Beneficial effects decrease or disappear with the discontinuation of regular exercise.

1. To prevent cardiovascular incidents, every patient should receive long-term treatment with an antiplatelet agent. Use acetylsalicylic acid (ASA) 75 to 150 mg/d; if this is contraindicated, use clopidogrel 75 mg/d or ticlopidine 250 mg bid. Use a statin, which may additionally help increase the claudication distance.

2. A combination of low-dose rivaroxaban (2.5 mg bid) with low-dose ASA (100 mg once a day) is an option.Evidence 1Weak recommendation (benefits likely outweigh downsides, but the balance is close or uncertain; an alternative course of action may be better for some patients). High Quality of Evidence (high confidence that we know true effects of the intervention). Anand SS, Bosch J, Eikelboom JW, et al; COMPASS Investigators. Rivaroxaban with or without aspirin in patients with stable peripheral or carotid artery disease: an international, randomised, double-blind, placebo-controlled trial. Lancet. 2018 Jan 20;391(10117):219-229. doi: 10.1016/S0140-6736(17)32409-1. Epub 2017 Nov 10. PubMed PMID: 29132880.

3. The efficacy of cilostazol or nafronyl oxalate (INN naftidrofuryl) in increasing the claudication distance is low. The evidence on the effectiveness of pentoxifylline is not convincing.

1. Indications: Critical lower limb ischemia (Fontaine stages III-IV, Rutherford stages 4-6 [Table 3.20-5]). Patients without critical limb ischemia but with moderate to severe claudication (Fontaine IIb, Rutherford 2-3) that is not improved by medical management and interferes with work activities or quality of life are often considered for invasive treatment if they have a good procedural risk and are determined to have anatomy favorable for successful intervention.

2. Treatment techniques: Percutaneous endovascular treatment (with or without stent implantation), surgical treatment (bypass graft implantation, endarterectomy, or both). In patients with extensive tissue loss (Rutherford stage 6), consideration may be given to proceed to primary amputation without revascularization. 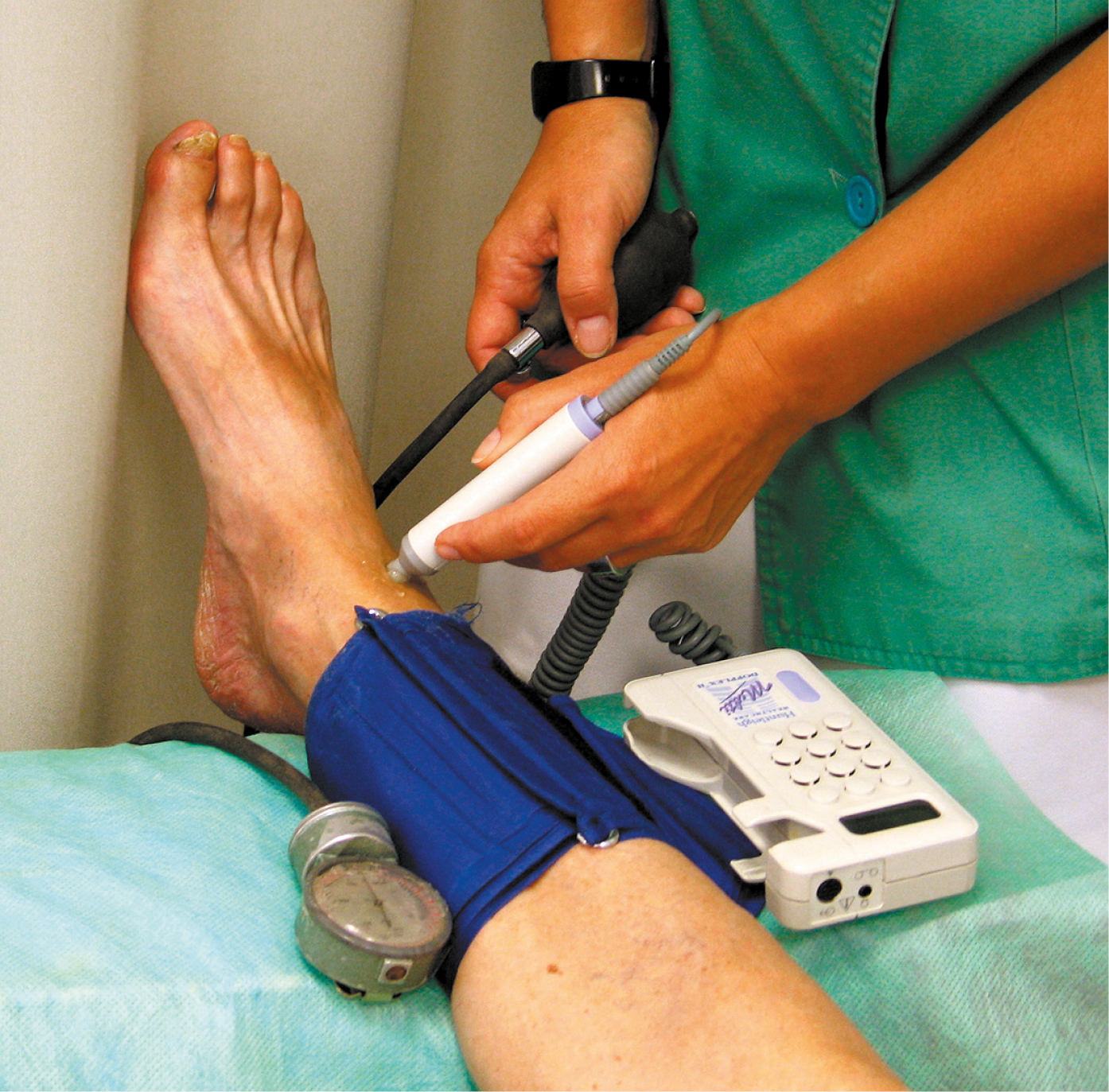