Long-term oxygen therapy (LTOT) is used in patients with advanced chronic respiratory failure (most frequently caused by chronic obstructive pulmonary disease [COPD], less often by interstitial lung disease or cystic fibrosis); sometimes it is also used in patients with chronic heart failure or advanced cancer. Indications for continuous LTOT for patients with chronic lung disease are best established for COPD (Table 21.15-1). In Canada, every province has their own policies regarding funding eligibility criteria of LTOT, which closely mirror the aforementioned indications.

Oxygen therapy is not contraindicated in patients with hypoxemia and chronic respiratory failure who already have or are at risk of carbon dioxide retention. However, controlled oxygen should be administered with target oxygen levels of 88% to 92%, as superfluous supplemental oxygen can precipitate worsening hypercarbia. Increasing carbon dioxide retention in a patient with chronic respiratory failure (most frequently due to COPD, less often with cystic fibrosis, bronchiectasis, kyphoscoliosis, neuromuscular diseases, or morbid obesity) should prompt the adjustment of the oxygen content in the mixture to ensure a target oxygen saturation of 88% to 92%, and noninvasive positive pressure ventilation or mechanical ventilation should be considered.

Oxygen therapy should never be used near an open flame source, which is an important consideration in patients with advanced lung disease who are unable to maintain smoking cessation.

1. Adverse effects of oxygen (these occur with the use of high oxygen concentrations, likely >50% or fraction of inspired oxygen [FiO2] >0.5; the risk increases with increasing oxygen content in the mixture and with longer duration of oxygen therapy):

3) Acute lung injury (this is difficult to distinguish from other causes of acute lung injury that require oxygen treatment) due to free radical formation and inflammatory response.

3. Restriction of mobility: An oxygen delivery device may hinder mobilization of patients and contribute to an increased risk of delirium and falls.

1) Hospital and emergency oxygen sources (100% oxygen supplied): Liquid or gaseous oxygen (compressed in tanks of varying capacity) supplied to the patient through a central oxygen supply system or from a portable oxygen cylinder.

2. An adjustable flow meter valve connected to a central oxygen supply port, a cylinder, or a concentrator is used to adjust the desired oxygen content in the breathing gas mixture.

1) Most frequently two-prong cannulas placed in the nostrils (nasal cannula [Figure 21.15-1]) are used for their high tolerability and comfort. A 100% oxygen flow of 1 L/min provides an oxygen concentration in the breathing gas mixture of ~24%, and every increase of 1 L/min (within the 2-8 L/min range) results in an ~4% increase in the oxygen concentration. The precise amount of delivered FiO2 may vary depending on the minute ventilation and the inspiratory flow rate of the patient.

2) Simple facemasks provide oxygen concentrations of 35% to 60% at flow rates of 5 to 10 L/min (~40% at 5-6 L/min, 50% at 6-7 L/min, 60% at 7-8 L/min). Flow rates <5 L/min should be avoided due to the risk of rebreathing the expired carbon dioxide and increasing inspiratory resistance. OxyMask is a type of facemask that uses a small diffuser to concentrate and direct oxygen towards the nose and mouth in order to deliver a wide range of FiO2 (Figure 21.15-2). The open delivery system reduces the likelihood of carbon dioxide retention even at the low flow rate.

3) Venturi masks (Figure 21.15-3) use 100% oxygen at various flow rates and different sizes of entrainment ports for room air to produce precise oxygen concentrations (24% [blue valve], 28% [yellow], 31% [white], 35% [green], 40% [pink], 50% [orange]) in the mixture. In patients with very high inspiratory flow rates, further entrainment of room air is possible and patients may receive less than the indicated FiO2. These masks are recommended in patients at risk of hypercapnia (see below) from hyperoxia, as they allow more precise titration of FiO2.

5) Nonrebreather masks (Figure 21.15-4) are fitted with a reservoir bag and a one-way valve preventing the mixing of air with pure oxygen. They enable delivery of nearly 100% oxygen by preventing exhaled air from entering the reservoir.

7) High-flow nasal cannulas (HFNCs) (Figure 21.15-5; nasal cannulas with flow rates >40-60 L/min) can provide oxygen concentrations close to 100% (depending on the brand of the delivery device) in the breathing gas mixture by using an air/oxygen blender, flow generator, and heated humidifier. They may also provide a slight increase in peak end-expiratory pressure (~4-5 cm H2O), which can potentially enhance oxygenation by alveolar recruitment. In patients with acute hypoxemic respiratory failure, HFNCs may reduce the risk of intubation.Evidence 4Weak recommendation (benefits likely outweigh downsides, but the balance is close or uncertain; an alternative course of action may be better for some patients). Low Quality of Evidence (low confidence that we know true effects of the intervention). Quality of Evidence lowered due to the risk of bias and imprecision. Rochwerg B, Granton D, Wang DX, et al. High flow nasal cannula compared with conventional oxygen therapy for acute hypoxemic respiratory failure: a systematic review and meta-analysis. Intensive Care Med. 2019 May;45(5):563-572. doi: 10.1007/s00134-019-05590-5. Epub 2019 Mar 19. PMID: 30888444. HFNCs have also been used in the postoperative setting and during airway instrumentation such as bronchoscopy. HFNCs can also be used for preoxygenation during endotracheal intubation; however, when used during peri-intubation, they may have no effect on peri-intubation hypoxemia compared with other noninvasive oxygen delivery systems.

4. Connecting tubing: A total length of up to 12 meters is acceptable for home oxygen concentrators.

5. Respiratory gas humidifiers and warmers are helpful when breathing high oxygen content mixtures via a mask; active humidifier systems (heated humidifiers) are the most efficient. Inappropriate hygiene during humidification may cause respiratory infections. Devices that humidify oxygen by passing it through a fluid from a cannula that is located on the bottom of a fluid container are not recommended, as their efficacy is not documented and the risk of infection is high.

1) Supplemental oxygen therapy should be started in patients with an initial SaO2 or SpO2 <90% and considered in those with an SpO2 of 90% to 92%.

2) The minimum amount of oxygen necessary should be used to target an SaO2 or SpO2 of 92% to 96%Evidence 5Strong recommendation (benefits clearly outweigh downsides; right action for all or almost all patients). Moderate Quality of Evidence (moderate confidence that we know true effects of the intervention). Quality of Evidence lowered due to indirectness. Siemieniuk RAC, Chu DK, Kim LH, et al. Oxygen therapy for acutely ill medical patients: a clinical practice guideline. BMJ. 2018 Oct 24;363:k4169. doi: 10.1136/bmj.k4169. PMID: 30355567. in all patients except those with confirmed or suspected hypercapnic respiratory failure (most frequently patients with COPD, less often with cystic fibrosis, bronchiectasis, kyphoscoliosis, neuromuscular diseases, or morbid obesity) to avoid hyperoxia. In patients at risk or with confirmed hypercapnic respiratory failure, the target SaO2 or SpO2 is 88% to 92%.

4) Administration of high concentrations of oxygen (>50% or FiO2 >0.5) is often necessary. Lack of clinical improvement within a short period (hours at most) is often an indication for HFNC or noninvasive or invasive mechanical ventilation.

1) Due to the risk of worsening chronic hypercapnic respiratory failure (especially in patients with COPD, bronchiectasis, and [less frequently] cystic fibrosis; other, rare causes: see above), do not use empiric high oxygen supplementation in patients with dyspnea without evidence of hypoxemia before obtaining information on the underlying pulmonary disease except in the case of life-threatening illness (eg, preoxygenation for intubation). The availability of SpO2 monitors in most clinical settings means that hypoxia can usually be detected quickly.

2) For most patients with known COPD or other risk factors for hypercapnic respiratory failure, a target saturation range of 88% to 92% using a controlled oxygen delivery method such as a Venturi mask is suggested pending the availability of blood gas results (ie, arterial blood gas analysis, arterialized capillary blood analysis, or less ideally venous blood gas analysis).

3) If low PaO2 values persist or hypercapnia worsens, urgent initiation of HFNC or noninvasive or invasive mechanical ventilation should be considered.

2) The recommend duration of oxygen therapy is ≥15 h/day, optimally 24 h/day if resting hypoxemia is present.

3) During sleep and physical exercise recommend increasing the oxygen flow by 1 L/min. 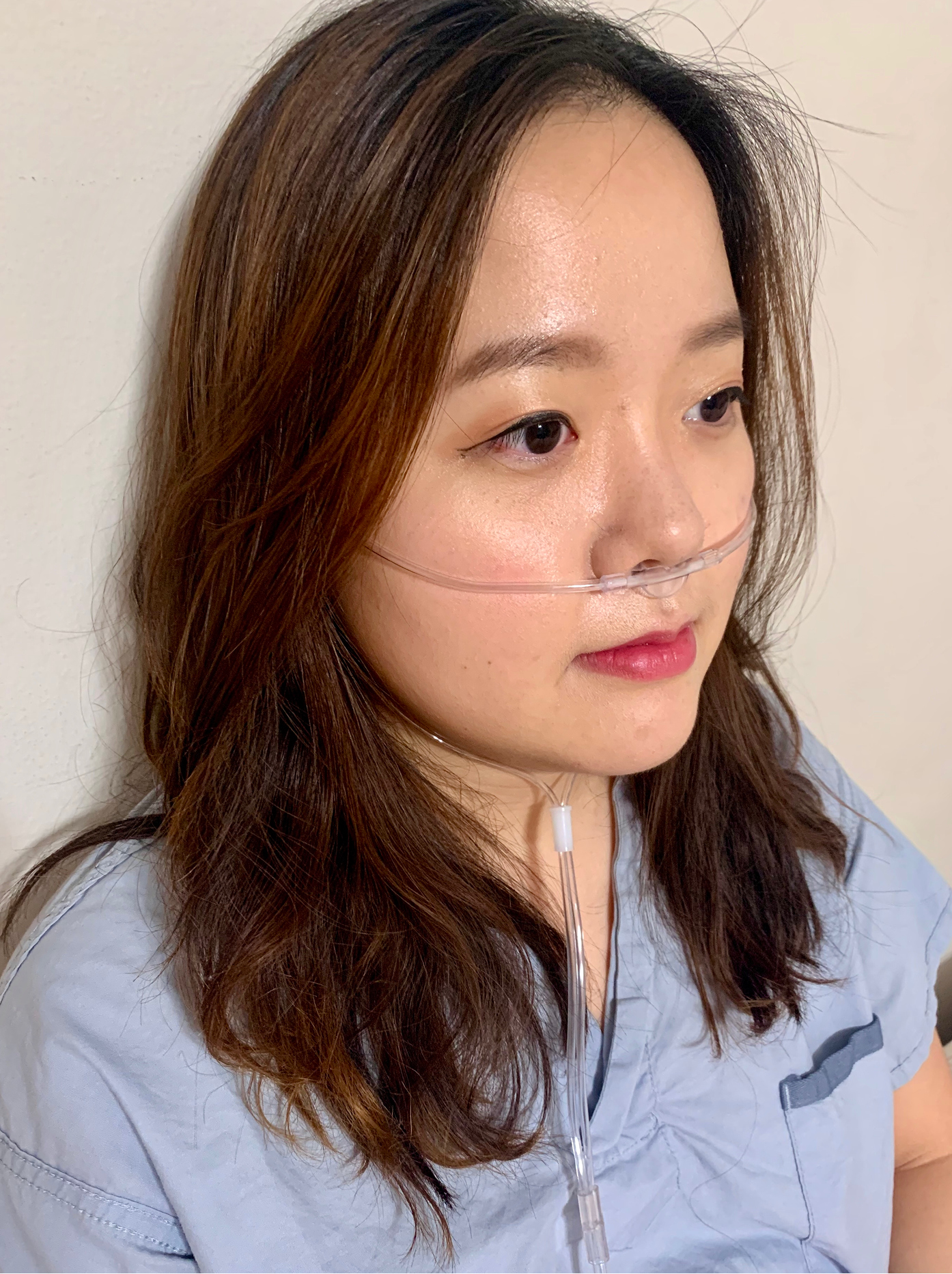 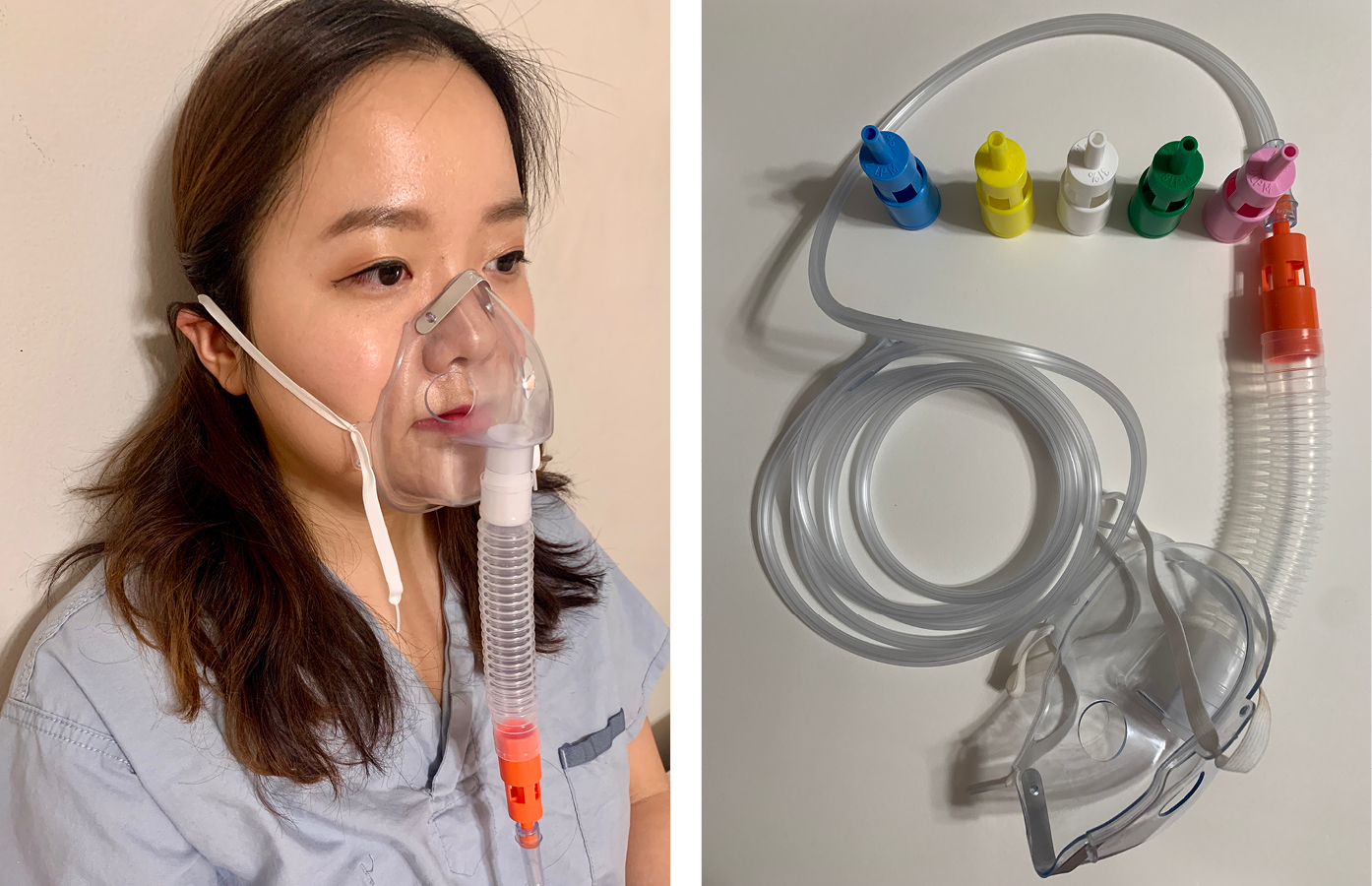 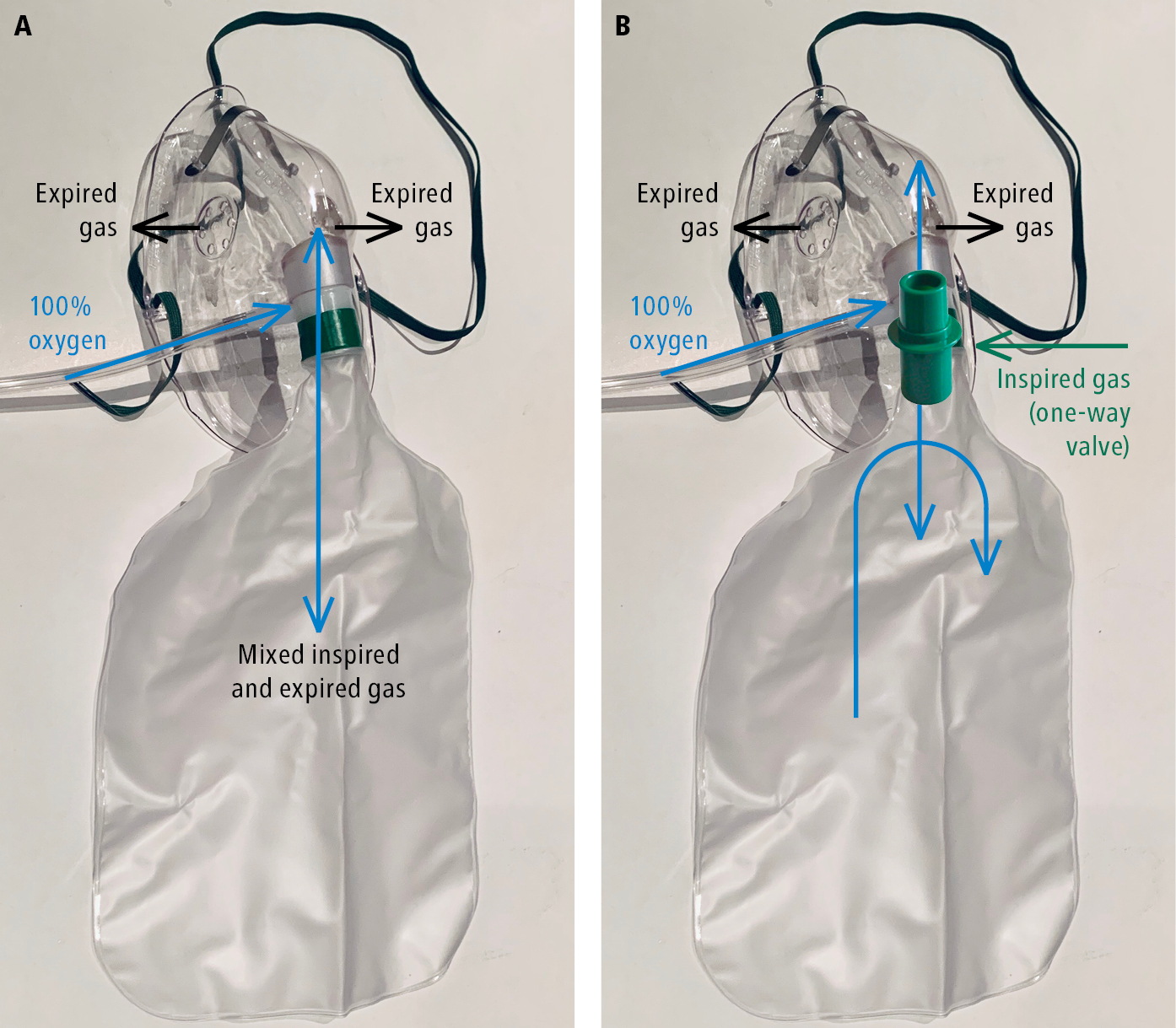 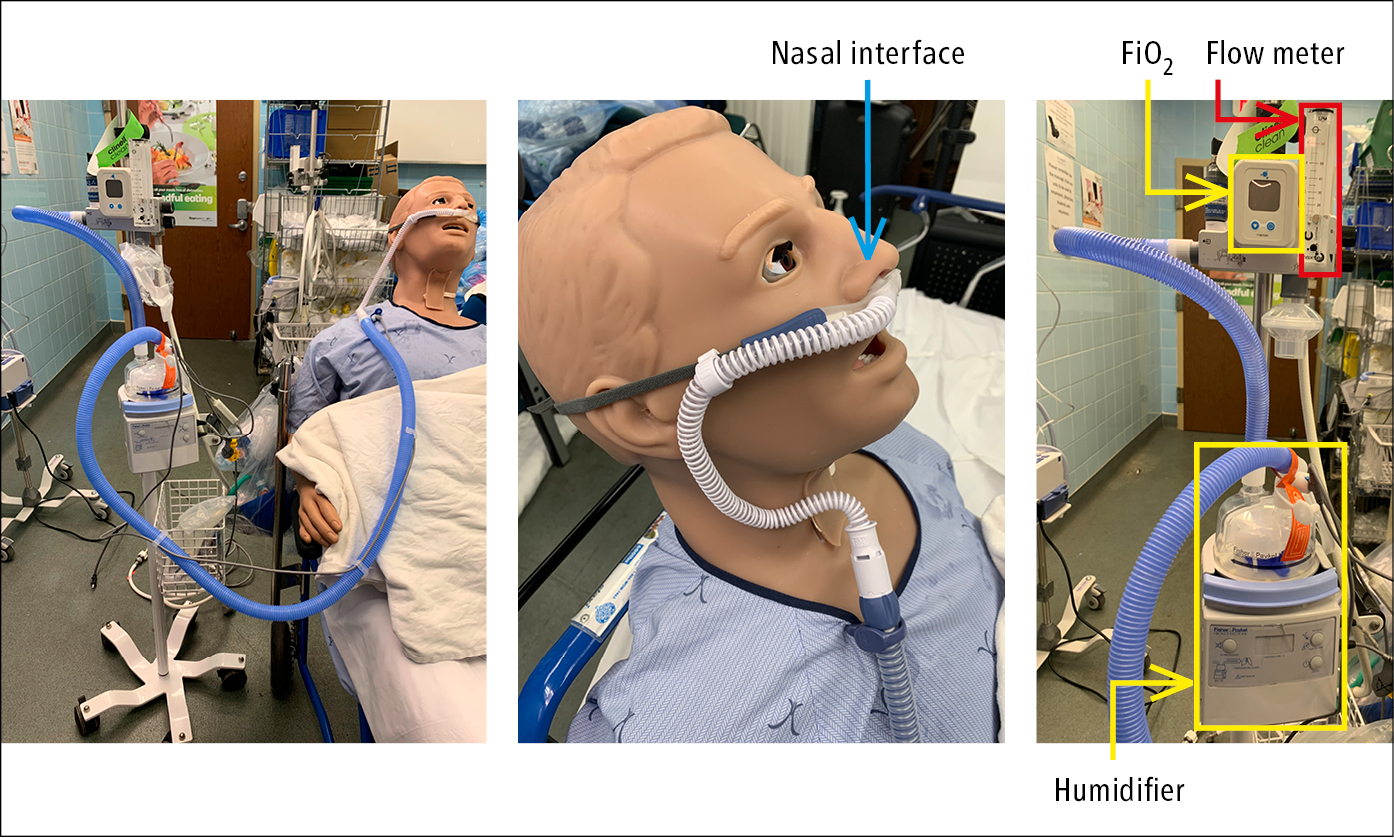