Gastroesophageal reflux disease (GERD) is defined as the occurrence of troublesome symptoms or complications caused by the reflux of gastric contents, including acid and pepsin, into the esophagus. It is an increasingly common gastrointestinal (GI) disorder with a prevalence of 10% to 20% in the Western world. The incidence and prevalence of GERD appear to be rising. The reason for this is unclear, but it may be associated with obesity and diet.

The pathogenesis of GERD is multifactorial and one or more causative factors, alone or in combination, may lead to reflux-related symptoms or injury. However, it is important to recognize that gastroesophageal reflux is a normal occurrence and that disease (GERD) occurs only if there are adverse consequences. Factors associated with the development of GERD may be categorized according to the underlying mechanisms:

1) Greater reflux into the esophagus:

3) Decreased clearance of reflux from the esophagus:

4) Greater sensitivity of the esophagus to reflux:

GERD may be further subclassified into esophageal and extraesophageal syndromes.

a) Typical reflux syndrome: 40% to 60% of symptomatic patients have nonerosive reflux disease (NERD) with no mucosal injury.

a) Reflux esophagitis: Distal esophageal injury (“mucosal breaks,” encompassing erosions and ulcers) on endoscopy in patients who may or may not have typical GERD symptoms.

1) Established associations (symptoms associated with GERD in some patients, although GERD is usually one of several etiologic factors and reflux therapy is usually effective only in patients who have typical reflux symptoms):

2) Proposed associations (symptoms occurring concurrently with GERD; there is no high-quality evidence to support a causal relationship between reflux and the reported extraesophageal symptoms):

Typical symptoms: Heartburn (a retrosternal burning sensation), regurgitation, and water brash (hypersalivation) are the cardinal symptoms of GERD. They may be worsened in a supine position, on bending, and while straining (especially after a large or fatty meal) and may be temporarily relieved by antacids.

GERD syndromes with esophageal injury may be asymptomatic and discovered incidentally on endoscopy performed for indications other than typical GERD symptoms. The course of GERD is associated with exacerbations and remissions. In most patients exacerbations do not lead to significant adverse outcomes. Untreated severe GERD may lead to bleeding, strictures, Barrett esophagus and, rarely, esophageal adenocarcinoma.

The presence of typical GERD symptoms ≥2 times a week and the absence of alarming features is suggestive of GERD and warrants an empiric trial of a proton pump inhibitor (PPI) once daily for 8 weeks. If symptoms persist, the dosage may be increased to bid for another 8 weeks without further investigation.

1. Endoscopy is the initial investigation for patients who have alarming features and those who have persistent symptoms despite appropriate escalated therapy with a PPI to assess for the presence and severity of erosive esophagitis (Los Angeles grade A and B, mild; Los Angeles grade C and D, severe), hiatus hernia, and Barrett esophagus, as well as other potential causes of persistent or atypical symptoms. Esophageal biopsy is not required to confirm GERD in the presence of erosive esophagitis but is indicated for suspected Barrett esophagus, eosinophilic esophagitis, malignancy, or other diagnoses. Repeat endoscopy is appropriate to confirm healing in severe esophagitis, to evaluate and (if needed) dilate strictures, and to monitor for progression of Barrett esophagus. Endoscopic follow-up is not needed for NERD or mild erosive esophagitis.

2. Ambulatory 24-hour esophageal pH monitoring (esophageal pH-metry) measures esophageal luminal acidity 5 cm above the gastroesophageal junction to determine whether there is excessive esophageal exposure to acid and a temporal relationship between the patient’s symptoms and the occurrence of an acid reflux episode. Concurrent esophageal impedance monitoring allows for the additional detection of weakly acid or nonacid reflux episodes that might cause symptoms despite PPI therapy sufficient to reduce esophageal acid exposure to normal levels. While esophageal pH-impedance monitoring is the gold standard for detecting and quantifying reflux, it has only moderate sensitivity and specificity for the diagnosis of GERD and should generally be reserved for patients who had an unsatisfactory response to adequate PPI therapy. Esophageal reflux monitoring may be performed after the patient has stopped PPI therapy for ≥1 week if the goal is to determine whether there is abnormal reflux; alternatively, it may be performed while the patient continues PPI therapy to determine whether adequate acid suppression has been achieved.

3. High-resolution esophageal manometry measures esophageal contraction pressures at multiple points along the esophagus to assess the function of the upper esophageal sphincter (UES), esophageal body, and LES. It cannot be used directly to make a diagnosis of GERD but is often performed to allow accurate placement of the pH electrode for esophageal pH-metry. Additionally, it can identify risk factors for GERD, including hiatus hernia, impaired LES function, and impaired esophageal motility, as well as achalasia of the cardia, which can induce GERD-like symptoms by impairing clearance of esophageal contents.

4. Barium swallow radiography has limited usefulness and should not be performed routinely to diagnose GERD. In rare circumstances, in patients with concurrent dysphagia it may reveal a hiatus hernia or GERD complications, such as esophageal stricture or features of achalasia, which can mimic GERD symptoms.

Symptoms of GERD differ in severity and frequency between patients and result in varying intensity of treatment. Generally, a stepwise approach is recommended, starting with lifestyle modifications and over-the-counter antacids. In patients with more frequent symptoms (≥2 times per week), empiric treatment with drugs that inhibit gastric acid secretion (see below) is warranted. Because GERD is a chronic disease, to control the symptoms and prevent complications patients should receive continual treatment (that will frequently be lifelong).

There is little if any evidence that lifestyle measures, detailed below, will lead to healing of erosive esophagitis, but these nonpharmacologic approaches may reduce GERD symptoms:

1) Avoiding eating for 2 to 3 hours before going to bed.

1. Gastric acid suppression therapy with a PPI or a histamine type 2 (H2) receptor antagonist (H2-RA) is the mainstay of treatment, with PPIs being more effective. For short-term treatment, PPIs are more effective than H2-RAs for symptom relief in patients with GERD symptoms (PPIs effective in up to three-fourths of symptomatic GERD patients, H2-RAs in about a half; for every 4 patients treated, one more will achieve remission with PPIs [number needed to treat, or NNT, of 4]) and in those with NERD (PPIs effective in about a half of patients, with H2-RA slightly less effective, resulting in NNT of ~8). PPIs are usually administered once daily 30 to 60 minutes before the first meal of the day at standard doses (dexlansoprazole 30 mg, esomeprazole 40 mg, lansoprazole 30 mg, omeprazole 20 mg, pantoprazole 40 mg, rabeprazole 20 mg) for 8 weeks. If GERD symptoms persist, PPIs may be given bid for a further 8 weeks before considering investigation or symptom reevaluation (Figure 7.1-1). The addition of a standard-dose H2-RA at bedtime may be considered but any benefit may be transient due to tachyphylaxis (pharmacologic tolerance).

2. Antacids and gastric mucosal protectants containing magnesium or aluminum, alginic acid, sucralfate, or hyaluronic acid/chondroitin sulfate are effective in patients with less severe or less frequent GERD symptoms and may be used as needed. The combination of mucosal protection (hyaluronic acid/chondroitin sulfate) with acid suppression (PPIs) may be indicated in symptom control of NERD, particularly in cases of partial or unsatisfactory response to PPIs alone. In pregnant women preparations of alginic acid or sucralfate are preferred, and when these are ineffective, ranitidine may be used for as short a time as possible and at the lowest effective dose.

3. Prokinetic drugs, such as domperidone or metoclopramide, or LES modifiers, such as baclofen, are not recommended for first-line use in GERD patients. There is little evidence to support their use, either alone or in combination with acid suppression, and their use is associated with appreciable adverse effects.

Antireflux surgery is now generally performed as a laparoscopic Nissen fundoplication procedure in which the gastric fundus is mobilized and then “wrapped” around the distal esophagus as a “collar” to reduce the likelihood that gastric contents will reflux into the esophagus (Figure 7.1-2). Long-term PPI therapy and laparoscopic antireflux surgery achieve comparable 5-year remission rates of 92% and 85%, respectively.Evidence 3High Quality of Evidence (high confidence that we know true effects of the intervention). Galmiche JP, Hatlebakk J, Attwood S, et al; LOTUS Trial Collaborators. Laparoscopic antireflux surgery vs esomeprazole treatment for chronic GERD: the LOTUS randomized clinical trial. JAMA. 2011 May 18;305(19):1969-77. doi: 10.1001/jama.2011.626. PubMed PMID: 21586712. Open fundoplication is usually restricted to patients with technical challenges, often related to prior antireflux surgery; there is no good evidence that endoscopic antireflux procedures or antireflux implants provide comparable symptom relief or long-term benefits.

Surgical therapy may be considered for patients who are unwilling or unable to take long-term medical therapy and those who do not achieve complete or sustained benefit with medical therapy; this applies in particular to patients who have large-volume reflux due to a large hiatal hernia or significant LES dysfunction and an increased risk of aspiration and respiratory symptoms. However, it is important to confirm the presence of pathologic reflux or reflux-induced disease before considering surgery in patients who report no benefit from medical therapy.

1. Barrett esophagus is defined as the presence of ≥1 cm of metaplastic columnar epithelium replacing the normal stratified squamous epithelium of the distal esophagus, proximal to the uppermost limit of the gastric folds. Risk factors include a long-standing history of GERD, male sex, age >50 years, white populations, hiatal hernia, increased body mass index, and abdominal-type obesity. Barrett esophagus develops in about 10% to 15% of patients with symptomatic GERD but may also occur in those who have no reflux symptoms.

Treatment: Until recently, there have been no high-quality studies of the effect of PPI therapy on long-term outcomes for Barrett esophagus. Therefore, current guidelines recommend that pharmacotherapy should use the lowest doses of PPIs needed to achieve freedom from reflux symptoms, as in uncomplicated GERD. However, a recent study has reported that a high-dose PPI (esomeprazole 40 mg bid) with ASA (300 or 325 mg daily) in patients with Barrett esophagus was associated with a significantly longer time to all-cause mortality, esophageal adenocarcinoma, and high-grade dysplasia at 9 years, with an NNT of 34 for PPIs and an NNT of 43 for ASA. There is no evidence that surgical antireflux therapy reduces the risk of progression to malignancy.

Barrett esophagus is associated with increased risk of esophageal adenocarcinoma. Endoscopic surveillance to identify areas of epithelial irregularity supplemented by 4-quadrant biopsies of the Barrett epithelium every 1 to 2 cm is mandatory, at intervals determined by the grade of dysplasia:

3) Low-grade dysplasia: Endoscopy every 6 to 12 months (initially repeat endoscopy at 6 months, later the surveillance interval can be extended to 12 months).

Dysplasia, particularly low-grade, may regress. In patients with high-grade dysplasia or persistently low-grade dysplasia, the preferred treatment methods are endoscopic mucosal resection (EMR) or mucosal ablation (radiofrequency ablation [RFA], cryotherapy, or photodynamic therapy). Ablation combined with intensive acid suppression may lead to partial or total replacement of metaplastic columnar epithelium with squamous epithelium. In patients with high-grade dysplasia, esophageal resection may also be considered. To date, none of the above methods has been proven to improve survival.

GERD is a chronic condition and recurrent symptoms are common, often requiring long-term medical therapy. Most patients have NERD or mild erosive esophagitis and although these can lead to impaired quality of life, progression to more severe erosive esophagitis, stricturing, Barrett esophagus, and esophageal adenocarcinoma is uncommon. Most patients can be managed with long-term medical therapy without any requirement for additional investigations, which are generally indicated only in the presence of alarming features or symptoms unresponsive to adequately titrated PPI therapy. 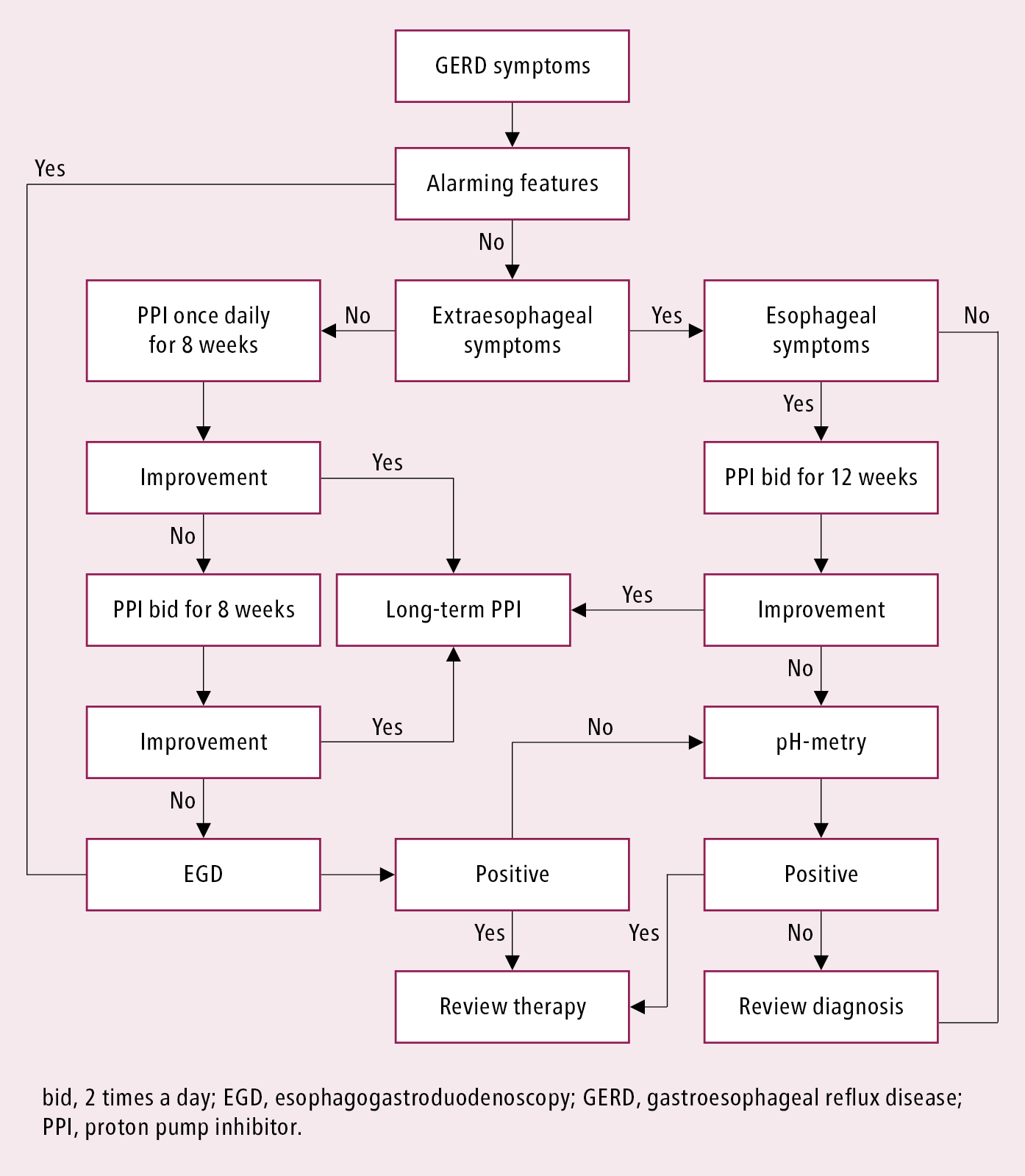