2) Lower GI bleeding (from a source located below the ligament of Treitz), which occurs in ~20% of patients hospitalized due to GI bleeding. The most common causes of severe lower GI bleeding in adults are colonic diverticula and vascular malformations, while the less common causes include inflammatory bowel disease (IBD), bowel ischemia, postradiation colitis (after radiotherapy for prostate or female reproductive tract cancers), hemorrhoidal disease, and neoplasms. In children and adolescents the causes may include intussusception (secondary to polyps), IBD, Meckel diverticular bleed, and small intestinal or colonic polyps.

1) Upper GI bleeding: The most common presentation is melena (tarry, black, foul-smelling stools). If the bleeding is brisk, hematochezia or maroon stools may be observed. Sometimes the presenting symptom is hematemesis with bright red blood or coffee-ground emesis. Epigastric or diffuse abdominal pain may be present (chest pain mimicking coronary disease occurs in some patients) as well as symptoms of hypovolemia (potentially leading to shock).

2) Lower GI bleeding: Hematochezia is the most common presentation but ~10% of lower GI bleeding presents with melena. Symptoms of hypovolemia may occur (potentially leading to shock).

2. Chronic bleeding may be asymptomatic or present as intermittent blood in stool, iron deficiency anemia, or fecal occult blood. Patients often have obscure GI bleeding (bleeding from an unknown source despite investigations including upper and lower GI endoscopy and small bowel radiography).

2) International normalized ratio (INR) and other coagulation tests: These are particularly important in patients treated with anticoagulants, such as vitamin K antagonists, especially because information concerning such treatment sometimes cannot be obtained from individuals with altered mental status. Coagulopathy may be also indicative of liver dysfunction or depletion of coagulation factors. Recent use of direct oral anticoagulants (DOACs) may require more specialized input (see Anticoagulant Agents).

3) Fecal occult blood tests (FOBTs) have no role in evaluation of the presence or localization of suspected GI bleeding, including evaluation of iron deficiency anemia.

The urgency of endoscopy depends on the clinical situation and is variably described as up to 24 hours from presentation (possibly much sooner in unstable patients). If urgent/early endoscopy is not feasible, introduce a nasogastric tube (after securing the airway if needed). The presence of bile without blood in the gastric aspirate suggests a lower GI source of bleeding.

Of note, urgent upper GI endoscopy may be indicated in patients who are unstable with hematochezia, as it is prudent to exclude a briskly bleeding upper GI source.

3. Colonoscopy is the initial diagnostic procedure for patients with lower GI bleeding. It should be performed after adequate bowel preparation, with timing depending on the clinical presentation and perceived urgency (ideally within 24-48 h of presentation).

4. Computed tomography angiography (CTA) may be helpful in locating the source of active bleeding. These images may then guide catheter angiography, which can be used to embolize the bleeding vessel.

5. Some patients with obscure GI bleeding (usually after repeat endoscopy and/or colonoscopy) may require small bowel evaluations with enteroscopy (push or double-balloon) or wireless video capsule endoscopy (VCE); each may be combined with CT enterography.

1. Patients should be treated in an acute setting and then transferred to a general ward or monitored setting depending on the severity of their condition and clinical progress. In patients with significant blood loss and impaired mental status, maintain the airway and intubate if necessary.

2. Measure blood pressure. If it is normal, perform the measurement in a standing position. A decrease in systolic blood pressure >20 mm Hg, decrease in diastolic blood pressure >10 mm Hg, or increase in heart rate >30 beats/min may indicate significant volume depletion, although by itself is neither sensitive nor specific. Check for signs of hypoperfusion, such as delayed capillary refill and other symptoms of shock. If needed, start treatment of shock (see Hemorrhagic Shock).

3. Correct blood volume for the blood lost due to the bleeding: Insert 2 large-bore peripheral vein catheters or a central venous catheter. Crystalloid is usually administered first as it is readily available. Packed RBCs (PRBCs) should be administered as soon as possible in patients with signs of hemodynamic instability or shock. Principles of large-volume transfusion include combination RBC and clotting agent preparations (eg, 1 unit of fresh frozen plasma for each 2 units of PRBCs) (see Hemorrhagic Shock).

4. Perform urgent/early endoscopy and make attempts to stop the bleeding using local injections of vasoconstrictors (such as epinephrine) or saline, electrocautery, argon plasma coagulation, hemostatic clips, and ligation of esophageal varices. The meaning of urgent/early endoscopy may depend on evolution of the patient’s clinical status and local availability of resources, but it likely falls within ≤24 hours if dictated by the level of clinical instability.

1) In patients with high-risk bleeding gastric or duodenal ulcers or acute hemorrhagic gastropathy, administer an IV proton pump inhibitor (PPI) (eg, esomeprazole, omeprazole, or pantoprazole). Our pattern of practice is to administer a bolus injection followed by a continuous infusion for 3 days (this also includes patients in whom bleeding was successfully stopped using endoscopy). If no further bleeding has occurred after 3 days of monitoring, the patient can be switched to an oral PPI. Low-risk lesions can be managed with initial oral PPI therapy. Of note, there is insufficient evidence to reach a firm conclusion about the superiority or noninferiority of PPI regimens for acute ulcer bleeding based on route (oral vs IV) and dose (high vs medium or low) of PPIs.Evidence 1Low Quality of Evidence (low confidence that we know true effects of the intervention). Quality of Evidence lowered due to risk of bias and imprecision. Neumann I, Letelier LM, Rada G, et al. Comparison of different regimens of proton pump inhibitors for acute peptic ulcer bleeding. Cochrane Database Syst Rev. 2013 Jun 12;(6):CD007999. doi: 10.1002/14651858.CD007999.pub2. Review. PubMed PMID: 23760821. All patients with peptic ulcers should be tested and, if positive, treated for Helicobacter pylori infection. Nonsteroidal anti-inflammatory drugs (NSAIDs) should be avoided (see point 4 below).

4) In patients treated with anticoagulants, neutralize the anticoagulant effects (vitamin K antagonists: see Table 3.1-4; heparin: see Heparins; fibrinolytic agents: see ST-Segment Elevation Myocardial Infarction). However, this should not delay endoscopy once needed. Hematology consultation may be required in case of use of DOACs. Also see Perioperative Direct Oral Anticoagulant Management. The management of both anticoagulants and antiplatelet drugs requires judgment of the risks and benefits of competing objectives and may require a multidisciplinary approach. The more efficacious the therapy of bleeding, the lower the risk of recurrent bleeding, and the higher the thromboembolic risk, the earlier resumption of drugs is possible. Antithrombotic or antiplatelet drugs can usually be restarted, possibly with gradually increasing intensity, within 3 to 7 days of acute bleeding. Long-term PPI use may be required if the source of bleeding is relevant.

6. In patients with bleeding esophageal varices in whom endoscopic attempts to stop the bleeding have failed, you may introduce a Sengstaken-Blakemore tube into the esophagus and stomach or another type of tube (eg, Linton-Nachlas) allowing for balloon compression of the varices; the tubes should be removed within 24 hours. The next step may involve shunting procedures (see below).

8. Since patients may require emergency surgery, involve a surgeon in the management at early stages of treatment. Surgery may be indicated in uncontrolled massive bleeding (ie, causing uncontrolled hemodynamic instability), also after an endoscopic or angiographic attempt to stop the bleeding; recurrent bleeding (following 2 endoscopic procedures); prolonged bleeding combined with an estimated blood loss >50% of circulating volume; and repeated hospitalizations due to a bleeding ulcer. The following surgical procedures are used:

3) Bleeding esophageal varices unresponsive to endoscopic treatment, pharmacotherapy, and insertion of tubes compressing varices: Transvenous intrahepatic portosystemic shunt (TIPS) is a minimally invasive method. If this is ineffective, perform portosystemic anastomosis or revascularization and transection (dissection and suturing) of the esophagus as well as splenectomy.

Routine follow-up gastroscopy ≤24 hours is not recommended in all patients treated endoscopically. It may be considered in patients at high risk of recurrent bleeding, if the mucosa is not fully assessed due to residual blood, the source of the bleeding is not found, or there is uncertainty about the effectiveness of hemostasis. If the source of bleeding was a gastric ulcer, it is necessary to perform a control gastroscopy after ~4 weeks from the first examination. 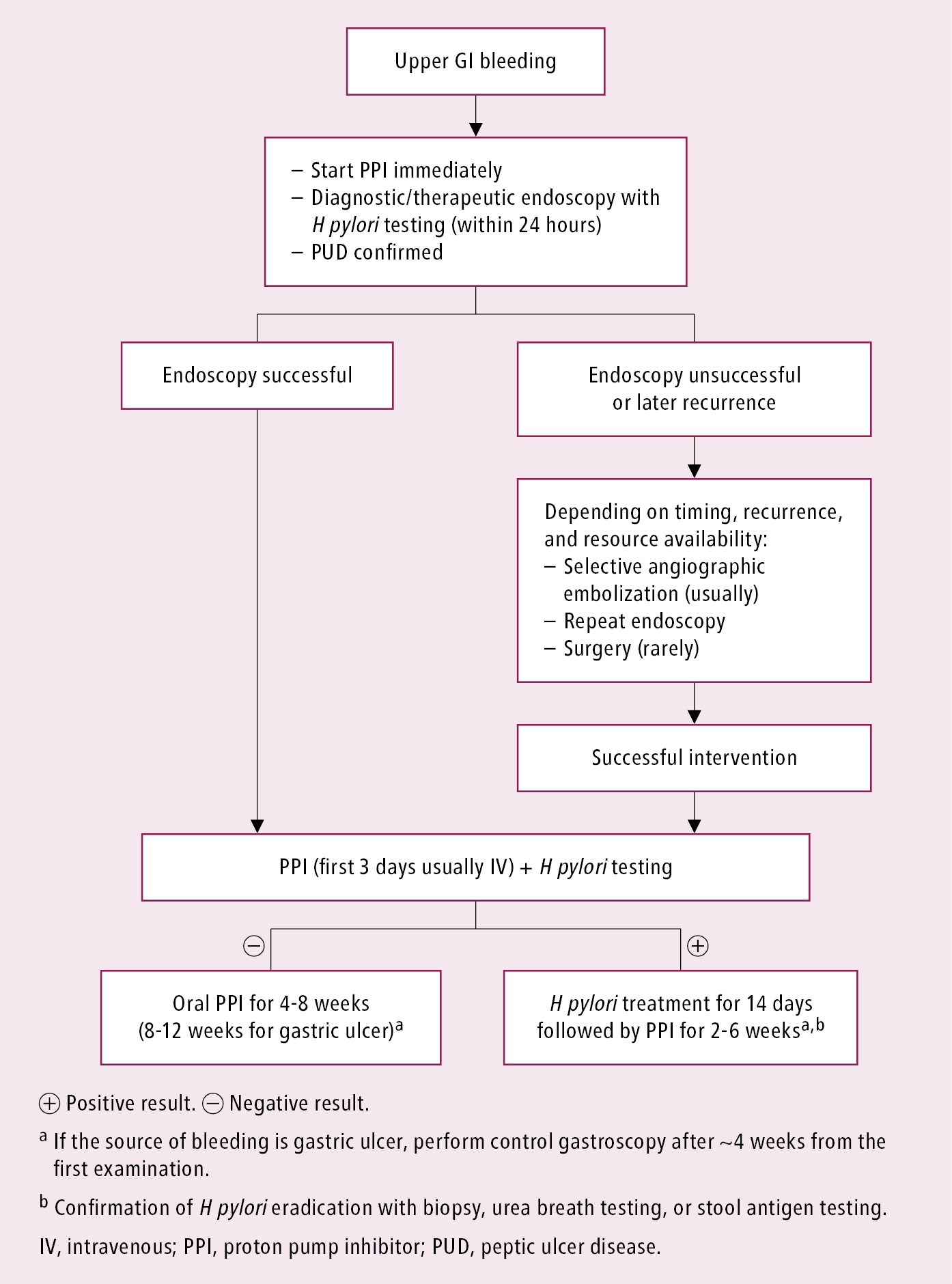 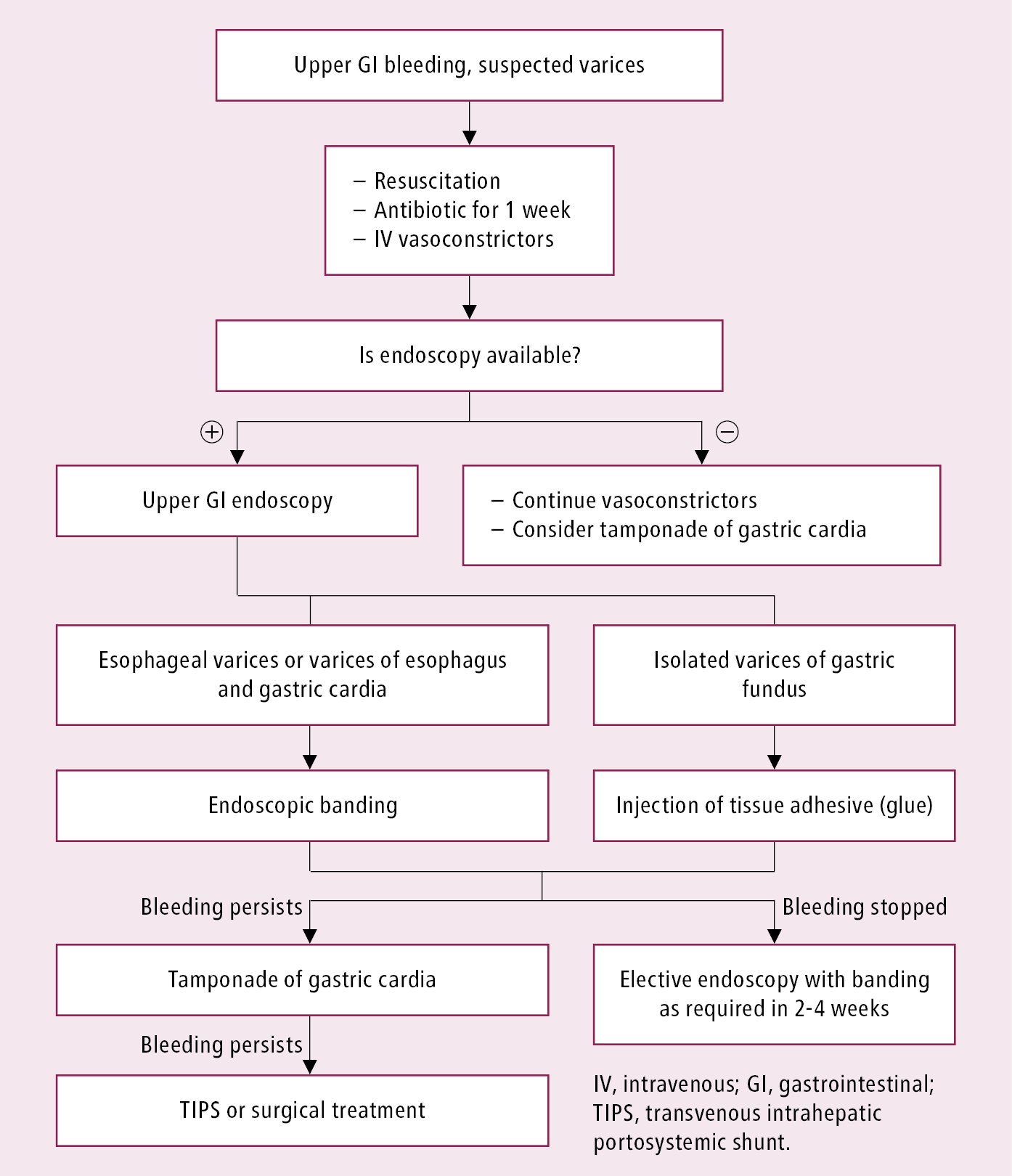