The clinical presentation of Clostridium (now Clostridioides) difficile infection (CDI) ranges from mild diarrheal disease to fulminant colitis with septic shock. Asymptomatic carriers may be a reservoir of the disease.

Pseudomembranous colitis is an acute diarrhea with typical yellow-grey plaques (pseudomembranes) developing on the surface of the mucosa of the large intestine (one of the more severe forms of antibiotic-associated diarrhea).

1. Etiologic agents: Toxin A and toxin B produced by C difficile, a spore-forming, anaerobic, gram­–positive bacilli.

2. Reservoir and transmission: Soil, environment (especially hospitals, long-term medical care institutions, daycare facilities), and individuals with C difficile carriage (5% of adults, more often the elderly; up to 50% of newborns and infants) are an important reservoir for environmental contamination, with or without an underlying clinical infection. Transmission occurs via the fecal-oral route by ingesting the spore form of the organisms.

4. Recurrence of infection: Recurrence is defined as complete resolution of CDI symptoms followed by the subsequent development of CDI symptoms within 8 weeks after the onset of a previous episode. Up to 25% of patients have recurrent CDI within 30 days of treatment. After ≥2 recurrences the risk for further recurrences is >60%.

The dominant clinical feature is diarrhea of varying intensity, ranging from 3 loose stools up to 30 watery stools over 24 hours; fresh blood may be occasionally present in stools. Lower abdominal cramping and fever may also be present. In more severe cases patients may develop dehydration, ileus, and shock. Approximately 15% of patients with a milder form of CDI recover spontaneously, particularly when the causative antibiotic is discontinued. Patients with severe CDI may develop ileus of the colon or toxic megacolon (see Ulcerative Colitis) with minimal to no diarrhea.

1. Laboratory assays: Establishing the diagnosis of CDI requires the presence of toxins or a toxigenic strain of C difficile in a liquid stool sample shown using enzyme immunoassay (EIA) testing or polymerase chain reaction (PCR). Stool samples from symptomatic patients only should be sent for laboratory testing, as the currently available laboratory assays cannot distinguish between infection and asymptomatic carriage of C difficile. Given that no single test has sufficiently high negative and positive predictive values, results of the laboratory tests must be interpreted only when the clinical context is consistent with CDI. Approximate characteristics of currently available tests: Table 6.1-6.

One approach is to use an algorithm of screening the stool sample with a sensitive test (eg, EIA for the detection of the common antigen glutamate dehydrogenase [GDH]) or a nucleic amplification test (NAAT) and, if positive, proceed to test the sample with more specific EIA testing to detect toxins directly (Figure 6.1-12). The other possibility is to perform both sensitive and specific tests simultaneously (eg, GDH and EIA for toxins) and if results are discrepant, do another sensitive test (NAAT; Figure 6.1-13). Of note, clinical context and judgment are always needed, especially with discrepant test results, as mild CDI or carriage of toxigenic C difficile is possible. Toxigenic culture of the stool sample may provide additional information.

2. Colonoscopy reveals pseudomembranes, which are characteristic whitish-yellow, yellowish-golden, or honey-colored plaques ranging from a few millimeters to 1 to 2 centimeters in diameter (Figure 6.1-14). They are relatively evenly distributed over the mucosa of the rectum and distal sigmoid colon; in ~30% of patients the lesions develop exclusively in the ascending colon. Pseudomembranes may not be apparent in patients with immunodeficiency or IBD.

The diagnosis of CDI consists of a combination of symptoms and one of the following:

2) A stool sample positive for toxins or toxigenic C difficile, including the toxin gene detected by the NAAT.

Diarrhea of another etiology (see Diarrhea); this diagnosis can be confirmed by medical history and microbiology results. Ulcerative colitis may be differentiated from pseudomembranous colitis caused by CDI based on the persistent presence of fresh blood in stools, lack of laboratory evidence of CDI, and (predominantly) distinct microscopic appearance of mucosal lesions. Other causes of pseudomembranous colitis are collagenous colitis and infections due to Campylobacter, Salmonella, Strongyloides, and cytomegalovirus.

1. Mild CDI: If possible, discontinuation of the implicated antimicrobial agent causing diarrhea. If continued treatment of the primary infection is necessary, switch to an alternative antibiotic that is not as strongly associated with pseudomembranous colitis (eg, an aminoglycoside, doxycycline, a macrolide).

1. The initial episode or first recurrence of severe forms of CDI, including pseudomembranous colitis:

1) Oral vancomycin 125 mg qid for 10 days; this is used in patients with severe CDI, in case of intolerance or ineffectiveness of metronidazole, and in pregnant or breastfeeding women. In patients with fulminant colitis and toxic megacolon, consider combined treatment with vancomycin 500 mg qid given orally or via an enteral tube (in patients with bowel obstruction the drug may be administered in enemas 250 mg qid) and IV metronidazole 500 mg tid.

2) Oral fidaxomicin 200 mg bid for 10 days. Use may be limited by the relatively high cost of the drug. The rate of clinical cure is similar for vancomycin and fidaxomicin; however, the rate of recurrence may be reduced by 50% with fidaxomicin for non–North American Pulsed Field type 1 (NAP1) strains.Evidence 1Moderate Quality of Evidence (moderate confidence that we know true effects of the intervention). Quality of Evidence lowered due to imprecision. Louie TJ, Miller MA, Mullane KM, et al; OPT-80-003 Clinical Study Group. Fidaxomicin versus vancomycin for Clostridium difficile infection. N Engl J Med. 2011 Feb 3;364(5):422-31. doi: 10.1056/NEJMoa0910812. PubMed PMID: 21288078.

3) Oral metronidazole 500 mg tid for 10 days for mild to moderate disease (without features of severe disease), or in severe disease only if vancomycin and fidaxomicin are not available or cannot be used. The cost of metronidazole in some jurisdictions may be significantly lower than that of vancomycin and even lower than the cost of fidaxomicin, with the absolute failure rate higher by ~1 per 10 treated patients.Evidence 2Moderate Quality of Evidence (moderate confidence that we know true effects of the intervention). Quality of Evidence lowered due to imprecision and indirect comparisons. Nelson RL, Suda KJ, Evans CT. Antibiotic treatment for Clostridium difficile-associated diarrhoea in adults. Cochrane Database Syst Rev. 2017 Mar 3;3:CD004610. doi: 10.1002/14651858.CD004610.pub5. Review. PubMed PMID: 28257555.

2. Fulminant CDI with hypotension, ileus, or megacolon: Oral vancomycin 500 mg qid or via a nasogastric tube or 500 mg rectally in 100 mL normal saline qid plus IV metronidazole 500 mg every 8 hours.

Approximately 50% of patients with multiple recurrent CDI respond to a tapering vancomycin regimen. An alternative to antibiotic therapy for recurrent CDI is fecal microbiota transplantation (FMT), which replenishes the protective colonic microbiota to prevent future episodes of CDI. Patients who have had ≥2 recurrences of CDI and received ≥1 course of a tapering vancomycin regimen may benefit from FMT.

The effects of systemic glucocorticoids in patients with severe pseudomembranous colitis are unknown. Do not administer drugs that reduce peristalsis (loperamide, opioids).

In patients with fulminant CDI, colectomy, if performed at an early stage of fulminant colitis, can be life-saving. Laboratory parameters suggestive of fulminant CDI include white blood cell counts >50,000 cells/microL and serum lactate levels >5.0 mmol/L. The usual practice is subtotal colectomy. However, a retrospective study comparing subtotal colectomy to a colon-sparing procedure of diverting loop ileostomy showed a mortality benefit with loop ileostomy at 19% versus 50% in historical controls and preservation of the colon in >90% of patients treated this way.Evidence 3Moderate Quality of Evidence (moderate confidence that we know true effects of the intervention). Quality of Evidence lowered due to the observational nature of data but increased to moderate due to effect size. Neal MD, Alverdy JC, Hall DE, Simmons RL, Zuckerbraun BS. Diverting loop ileostomy and colonic lavage: an alternative to total abdominal colectomy for the treatment of severe, complicated Clostridium difficile associated disease. Ann Surg. 2011 Sep;254(3):423-7; discussion 427-9. doi: 10.1097/SLA.0b013e31822ade48. PubMed PMID: 21865943.

Treatment may be considered effective if abnormal temperature normalizes within 24 to 48 hours and diarrhea resolves within 4 to 5 days. In more severe cases repeated abdominal radiographs should be performed to exclude toxic megacolon. Follow-up testing for C difficile toxins is not recommended as there is no laboratory test of cure. Reappearance of signs and symptoms within 8 weeks of onset of a previous CDI episode suggests recurrence of the infection. Patients with suspected recurrence of CDI should be managed according to the clinical presentation.

Judicious use of antimicrobial agents.

In hospitals, long-term medical care institutions, and daycare facilities it is necessary to:

3) Wear gown and disposable gloves when caring for CDI patients.

5) Use agents effective against C difficile spores to disinfect rooms and bathrooms.

6) Properly dispose of used diapers, particularly in the case of CDI patients and carriers of C difficile. 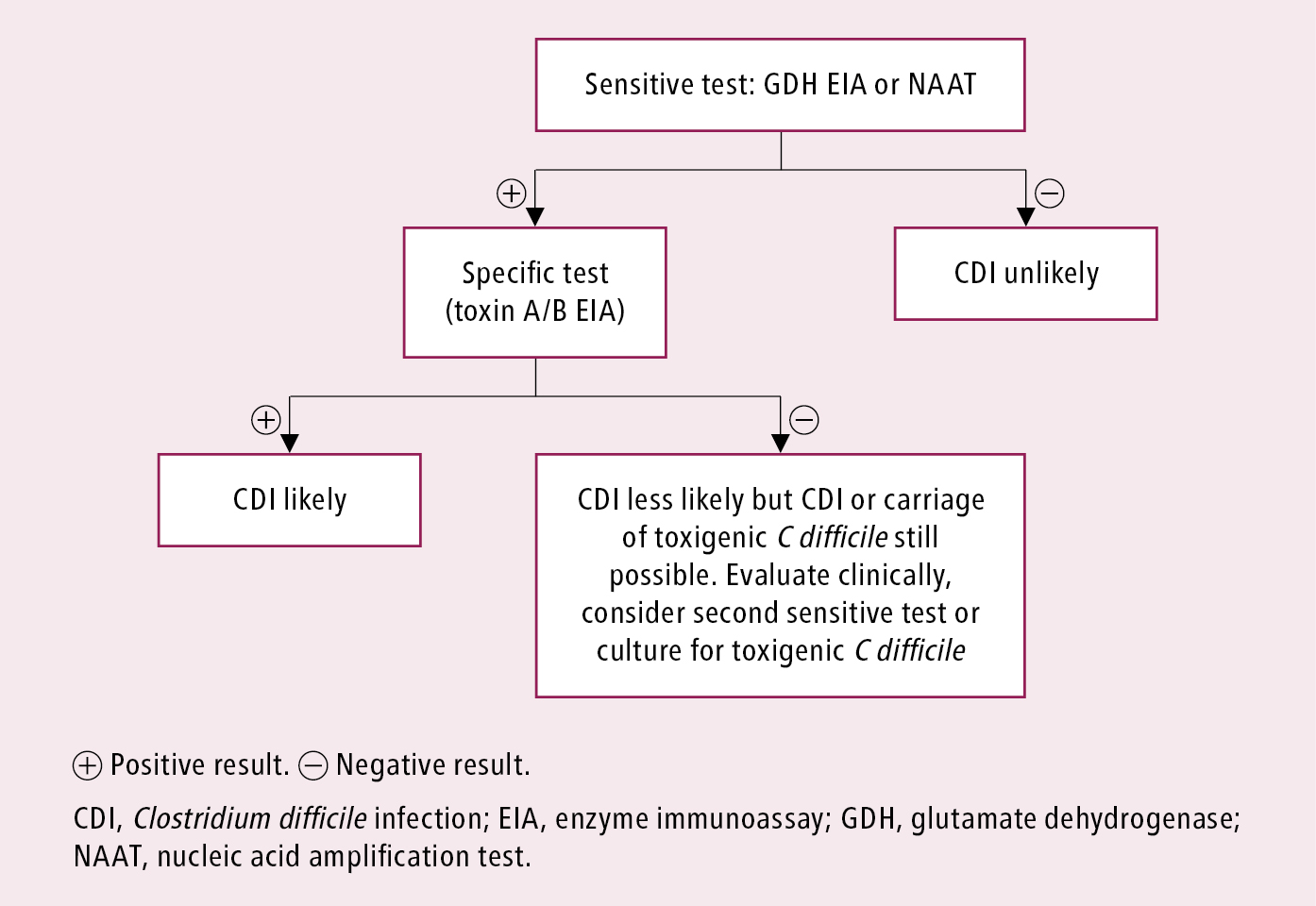 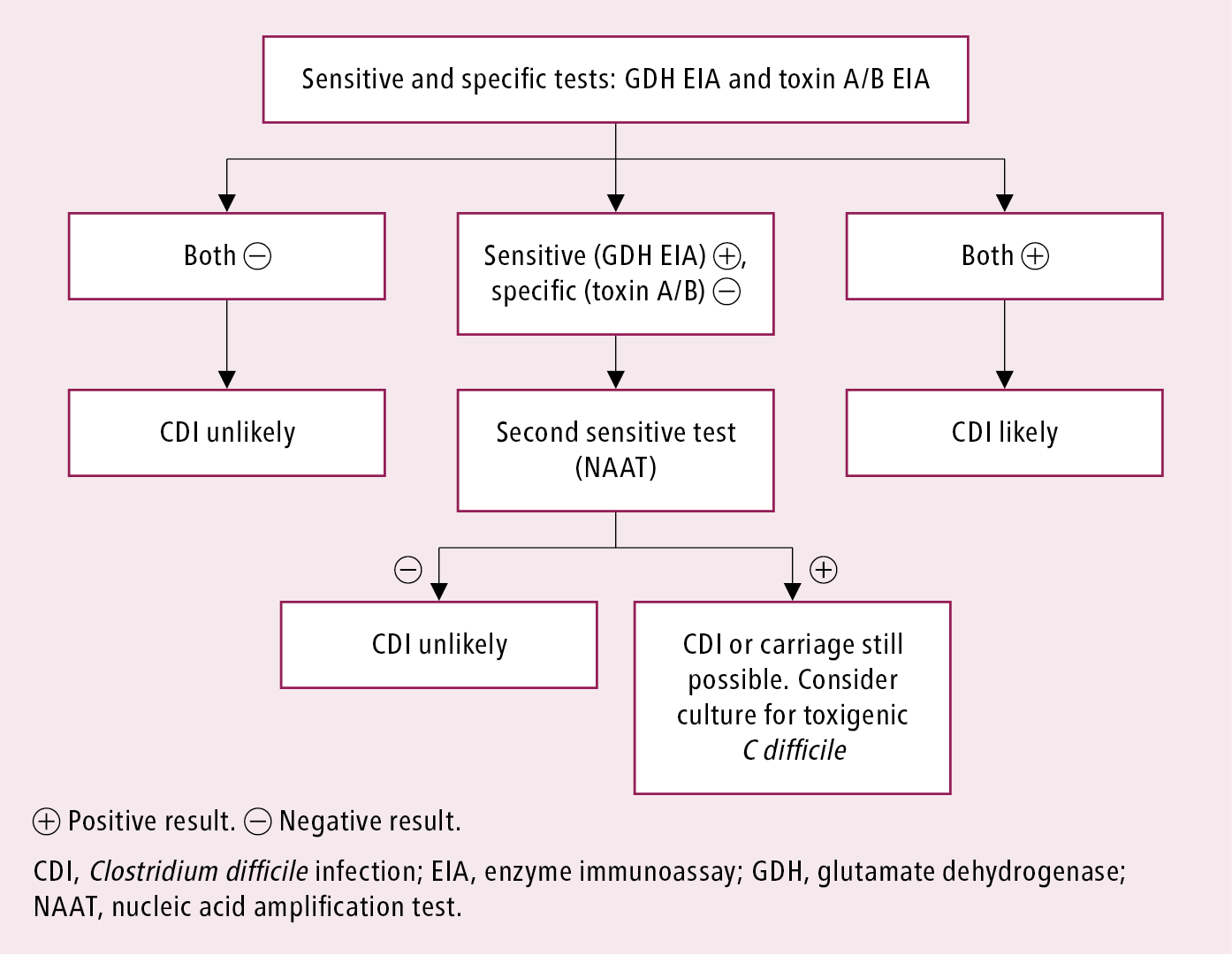 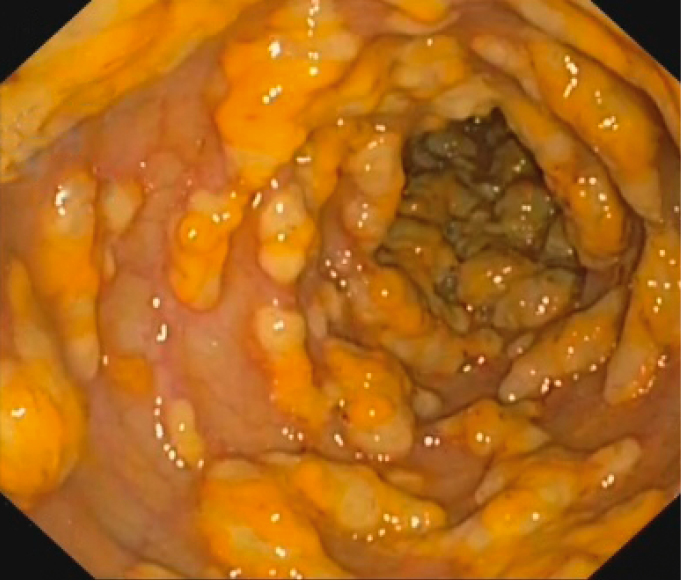